As a small business owner, I sign a lot of documents - invoices, quotations, insurance policies, retainer contracts, forms, you name it. Even though life is a lot simpler with digitisation, you still have to print out a form, sign it, scan it and e-mail it back to sender. Multiply that with multiple forms and business users will soon realise how much of time is wasted doing this every day.

Enter the convertible laptop -with a digital stylus.

Open the file, sign, save and send it back. No printing or scanning. Instead of a five-minute job, it takes just five-10 seconds.

That is why the iPad Pro with the Apple Pencil is such a great device and that is what I have been using for the last two years to sign my forms and contracts. The challenge however is that I am a Windows PC user and managing two devices – one for work and one primarily for e-signing can be a chore.

An alternative solution of course is to consider a convertible laptop. A convertible laptop consists of a touch screen which can function as both laptop and tablet. Flip the touch screen all the way to the back, and you have a tablet – great for reading as well as for drawing and signing if it also comes with a digital pen.

The arrival of the convertible laptop

The convertible laptop category burst into the scenes in tandem with the arrival of Windows 8 in 2012. That year, the entire PC industry migrated to the new tablet-cum-laptop form factor which Microsoft was pushing, as the computing giant tried to force users to move away from the familiar desktop interface to the tiled-based touch interface in a bid to wrest control from iOS and Android.

Microsoft stumbled with Windows 8 and its new CEO Satya Nadella later won back the hearts of many fans with ease when he simply announced that Microsoft would go back to the familiar desktop interface with Windows 10.

I was not a fan of the convertible laptop in the past, but the convenience and advancements in the digital stylus for e-signatures and form-filling has made me rethink my options almost 10 years later.

The pen is mightier than the mouse

When it comes to freeform drawing and signing, the pen always beats the mouse. You can use the mouse to sign documents, but it always goes haywire, like a surgeon trying to make precision cuts with a sword.

The key consideration when choosing a convertible for drawing, writing or signing is the digital pen. An active stylus with a compatible digitiser touch screen lets you emulate strokes more accurately.

Look for pen + screen solutions where your strokes are accurate, the strokes are not lagging, have pressure sensitivity, must reject palm touch perfectly and even have the ability to hover and access contextual menus. The stylus should also be rechargeable and have an easy place to store when not in use.

A canvas for the digital artists 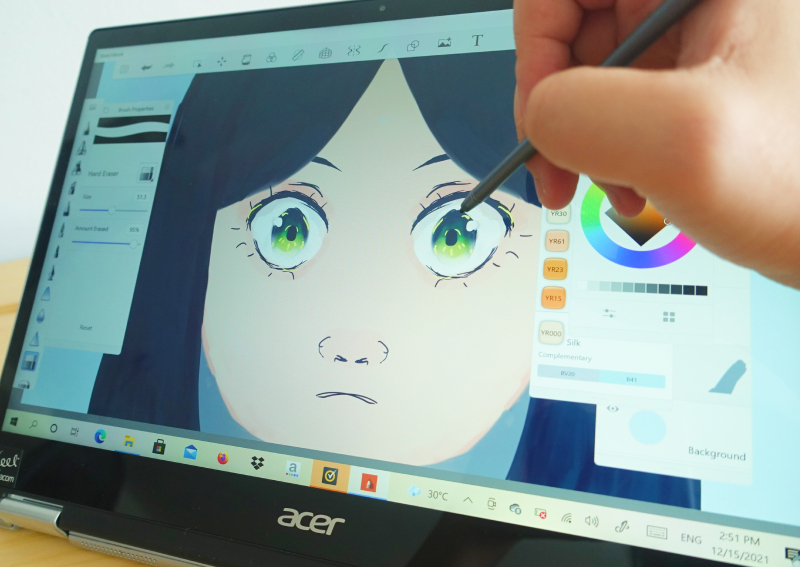 A convertible laptop also doubles up as a digital canvas for budding and professional artists and folks in the creative industry. Instead of using a separate Wacom tablet and pen, users can draw directly on the touchscreen display, which is more natural and intuitive. In fact, many of the convertible laptops such as the Acer Spin 3 has Wacom’s “feel” technology built into its touchscreen display.

(1) Does the digital stylus work well with the touchscreen display

Whether you are buying this for e-signing or for artistic calligraphy, the most important feature is how well the digital pen writes on the touchscreen display. There is only one way to know this, you need to try it out. Another important feature is also to consider how long it takes to charge the stylus and if there is an easy way to store and charge the stylus when it is not in use.

(2) The colour gamut and resolution of the touchscreen

This is less of an issue for document signing but will be an important consideration for digital artists. Having a screen with higher colour gamut and screen resolution means you can see more colours and see them more accurately. Some convertible laptops such as the Acer Spin 3 offer 100 per cent sRGB colour gamut and 2560 x 1600 screen resolution, which is a step up from the usual 1920 x 1080 Full HD screen.

A good laptop must first and foremost be a decent ultrabook that is light and have long battery life to do your daily computing tasks. See our earlier guide here for tips on how to choose an ultrabook. It’s a good idea to look for a convertible with the Intel Evo certification as it guarantees a high standard of portability and battery life – essential for drawing in the great outdoors.

At home, you can save space by connecting the laptop to a modern USB-C monitor. The monitor provides power to the laptop with the Thunderbolt 4 port via the same cable that outputs the laptop to the monitor. Always ensure also that the laptop has a full-sized HDMI port if you are planning to make presentations.

The “drawing” touchscreen is naturally heavier than the typical touchscreen you get in some ultraportables. That adds to the weight of the laptop but it is still possible to get something that weighs in at about 1.4kg so that you can still bring it along with you everywhere you go.

For comparison, a premium thin-and-light ultrabook should weigh about 1kg, a mainstream ultrabook at 1.2kg and a standard workhorse 14-inch laptop is at 1.4kg. Even with the heavier touchscreen, it is still possible to get a convertible laptop that weighs the same as an everyday computing workhorse laptop.

Some modern convertibles such as the Acer Spin 5 are breaching the lightweight barrier, weighing in at as light as 1.2kg.

Fast charge and battery life are also key considerations as you do not want your battery to die out while your creative juices are still flowing.

Gaming should not be a primary concern if you are looking for mobility but there are some games that you can still play in low settings.

The key hardware specs that affect the final price of the convertible laptop are mainly the processor, RAM, SSD storage and screen quality.

I always recommend the Core i5 over the i7 to save some moolah, as most users do not need the incremental benefits of the i7.

If you are using your laptop for general work productivity and document signing, 8GB RAM is sufficient. But if you are going to work with graphics, then 16GB is a better option.

Storage is important, and I would always recommend buying or upgrading to a 1TB SSD storage instead of sticking to the 512GB in some laptops because you don’t want to worry about running out of space as your library of documents and photos grow on you.

As for screen resolution, look for something with a higher resolution than the standard FHD. A good choice would be WQXGA (which is 2560 x 1600).

Discrete (separate) graphics cards are not recommended as it will add to the weight of the machine. Having a touchscreen which you can draw on already draws more battery compared a regular laptop.

Adding a discrete graphics card would make it worse. Don’t worry when you see words like Intel Iris X or AMD Radeon graphics, it means you are utilising the power of the integrated graphics in the main processor, which is a built-in feature of the modern processor.

Here is a quick summary of what I recommend for a convertible laptop:

RAM – 8 GB (if you are using for e-signing only, 16GB if you plan to partake in digital art)

Connectivity – at least 1x full-sized HDMI port, at least 1x Thunderbolt 4 or USB-C port (they look and work the same)