Guide to getting your first work-and-play laptop A very common question I get from friends with younger teenage kids - Gin, can you recommend a laptop for schoolwork? Then I ask them - does your 13-year-old also want to play PC games? The answer these days is almost invariably yes.

Getting an affordable laptop for everyday computing and also for playing games used to be a tough problem. It's easy to get a mainstream laptop that costs about $1,000 to $1,2000 that is reasonably light, portable and gets the job done. But playing games on a 1.4kg laptop has always been a challenge.

Many brands added in sub-par graphics cards to let users feel like they can also play games on a regular laptop - but these graphics cards were often so weak that they offered little improvement over the integrated graphics chips already built into the processor.

To be able to play most games in high or ultra settings in at least Full HD resolution is minimally what a PC gamer wants to achieve. And for that, the solution previously was to invest in a full-bodied gaming laptop.

These gaming laptops offered powerful graphics cards, robust speakers, fancy lights and better cooling, but there is a catch - they are over 2kg bulky, have poor battery life and costs significantly more than a regular laptop.

These gaming laptops also look like they were designed more for play than for work - a situation that does not sit well with parents who really want a work laptop that can offer also gaming as a secondary function.

The arrival of the work and play laptop 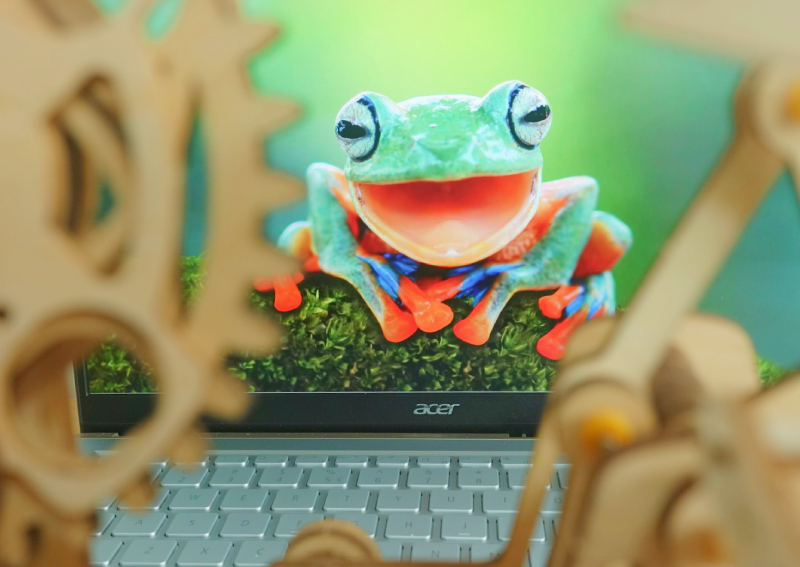 The good news is that over the last six months, a new category of laptop that offers both work and play has arrived - from many leading brands out there including Acer, Asus and Lenovo Legion.

It's very telling that Acer has placed this work-and-play laptop under the Swift range, instead of its gaming range. To me, that's an indicator that the Swift X is first and foremost a work laptop, but one with a powerful graphics card that can handle just about any game you throw at it.

The 14-inch Swift X is about 1.4kg, which is the same weight as the mainstream Aspire workhorse laptop. It even looks like it. It's not as light as the Swift 5 (1kg) and the Swift 3 (1.2kg) both of which are ultraportables designed for lightweight mobile computing. But at 1.4kg it is way lighter than the 2.2 to 2.4 kg gaming laptops.

These modern work-and-play laptops, such as the Swift X, are now offering an entry-level Nvidia GeForce RTX 3050 graphics card in its standard mainstream laptop chassis. In fact, looking at the non-descript Swift X, you wouldn't even know it is a gaming-grade laptop until you power it up. I threw a bunch of games at the Swift X, and the machine was able to handle all of them.

Is it good enough for gaming?

I threw a bunch of games at the Swift X - my test set has Ryzen 5 processor, Nvidia RTX 3050 graphics card, 16GB RAM - and it performed admirably all round. Diablo 4, Hearthstone, Heroes Of The Storm, Civilization VI, Borderlands 3 and Destiny 2 all played comfortably. Using the built-in benchmark in Borderlands 3, I achieved about an average 35fps (frames per second) in "ultra" settings and about 40fps in "high" settings.

I launched Destiny 2 at high settings and fought enemies at the busy Sorrow's Harbour location where there where plenty of enemies to kill and managed to achieve about 40fps consistently.

In the old days (say a decade ago?) when I was a full-time tech reviewer, the goal was to achieve an average 30fps in games. The theory then was this - that our eyes cannot see anything faster than 25fps - so an average 30fps should provide a consistent and smooth experience.

Well, 10 years later, and the power of the hardware has exploded exponentially so people started setting higher frame rate standards. Today, most gamers and reviewers aim to achieve 60fps, many claiming that this is necessary for modern shooters such as Fortnite and Apex Legends. I love playing games, but my skill is not great. What I can say is from my own experience, if you can hit a consistent 30-35fps for any game, the gameplay is smooth enough.

The short answer to the question is this: yes, the work-and-play laptop equipped with the Nvidia RTX 3050 is good enough for gaming and you should be able to run almost any game at high (and even ultra settings) at Full HD resolution smoothly.

The issue of cooling

While laptops like the Swift X is offering an amazing option for gaming in a regular laptop chassis, it's important to note that playing games for long periods of time heats up the machine considerably.

That is why the traditional gaming laptops are huge and full of noisy fans - they offer more space for components to breathe and for the fans to cool down the graphics cards. These work-and-play laptops will get very hot after two hours of gaming. If you are planning to play games any longer than that, perhaps a full-bodied gaming laptop would be a better option.

But if you value portability and affordability first - mostly everyday computing tasks with some solid gaming time in between - then the work-and-play laptops like this Swift X are a good option. 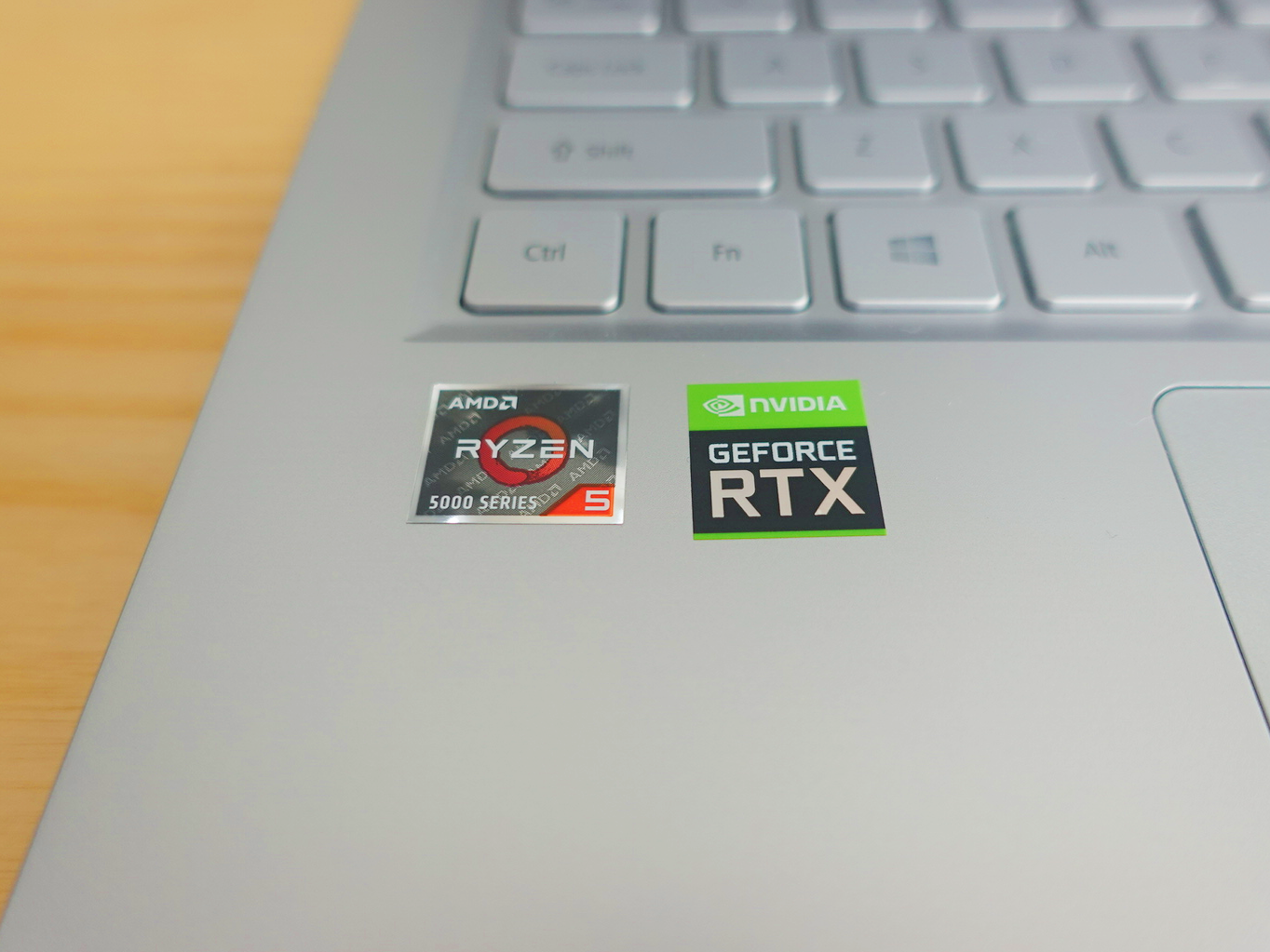 The key hardware specs that affect the final price of the convertible laptop are primarily the graphics processor followed by the CPU, RAM, SSD storage and screen quality.

I would recommend at least an Nvidia RTX 3050 for the graphics card, and this offers good bang for the buck.

For the CPU or the general processor, most of the work-and-play machines offer the AMD Ryzen, and either the Ryzen 5000 or the Ryzen 7000 are great. I would go for Ryzen 5000 to save money as the main driver of performance is the graphics card.

Since gaming is so resource intensive, at least 16GB of RAM is needed, even 32GB might make sense here.

Storage is important, especially since games now take up a lot of space, so I would not settle for anything less than 1TB.

As for screen resolution, look for something with the standard Full HD resolution. There is no point in going for anything higher because you will need a lot more graphics power to play games smoothly in anything higher than FHD resolution. This is still a work-and-play laptop, and cooling will become a challenge if you push it too hard with the limited chassis space.

Here is a quick summary of what I recommend for a work-and-play laptop laptop:

Note that you are paying almost double the price for this amazing laptop compared to a regular budget workhorse machine like the Aspire 5 which you can get for about $1,000. It's 2X the price, but the difference is that you can actually play games on the work-and-play machine.