A first look at the ROG Flow Z13: An impressionable and versatile gaming tablet You got to give Asus props for always upping the ante in their product design. It doesn’t always work — the confounding array of Zenbook models (Zenbook 14? Zenbook 14X OLED? Zenbook 14 OLED? Yikes!) still confuses us at HardwareZone to no end.

But their gaming sub-brand ROG, on the other hand, continues to surprise me and in a good way. This time, it’s the Flow Z13 , which the company has touted as the “world’s most powerful gaming tablet”. That’s right, a gaming tablet. But after spending some time with an engineering sample that Asus sent over, I think that’s a bit of a misnomer.

You see, while the ROG Flow Z13 is essentially a 2-in-1 laptop-tablet hybrid that looks akin to a souped-up Microsoft Surface Pro (it’s got a kickstand and a detachable keyboard that comes on and off easily), in many ways, it’s built more like a laptop than a tablet.

For one, it’s running on a full-fledged Windows 11 OS. My sample also got an RTX 3050 Ti discrete GPU inside. Lastly — and here’s the best part — it can even be hooked up to the ROG XG Mobile external GPU (with an RTX 3080), turning it into a mobile gaming powerhouse.

The downside? It’s also unlikely to be super affordable — Asus couldn’t share the price with me yet — and I will caveat that as with any hero ROG products, the Flow Z13 isn’t made for the gamer on the street. Like the ROG Mothership, the Flow Z13 feels like a niche, luxurious even, gaming product. But it may also be a peek into a form factor that eventually make its way to the mainstream.

What may not be obvious from the pictures here is that unlike what you would expect from a tablet hybrid, the Flow Z13 is quite chunky (relatively speaking) at 1.2cm thick and almost 1.2kg. It’s certainly not meant to give you the same mobile experience as you would with a Surface Pro-like device or an Apple iPad.

But considering how ROG can cramp up to an Intel 12th Gen Core i9-12900H CPU (an i7-12700H processor in our unit) alongside a discrete RTX 3050 Ti GPU inside a 13-inch slab of metal, and managing to keep it cool at the same time, is a modern engineering marvel.

In short, it’s a really great looking and well-made laptop (or a tablet, if you will) that’s powerful enough to not let you down for daily productivity and gaming.

The 13.4-inch display is worth mentioning for its WQUXGA (3840 x 2400) and 16:10 aspect ratio. It also supports touchscreen and stylus, Dolby Vision, MUX Switch and Optimus, and is Pantone Validated. Unfortunately, refresh rate is only up to 60Hz although I think it’s a good trade-off in having to choose a top-notch display over a faster one. And wow, it’s a really gorgeous display.

Ports selections are pretty good on the Flow Z13 too, which you rarely see on similar products. This includes a USB-C that supports Thunderbolt 4 and DisplayPort, USB-A, 3.5mm combo audio jack, and a microSD slot at the back. Connecting the XG Mobile not only boosts the laptop’s graphic prowess but also adds additional ports including HDMI 2.1 and Ethernet. There are even volume keys on one side.

If I were to be nit-picky, I wished ROG had been a little more adventurous and add a micro-SIM slot as well, to give the Flow Z13 complete mobility. 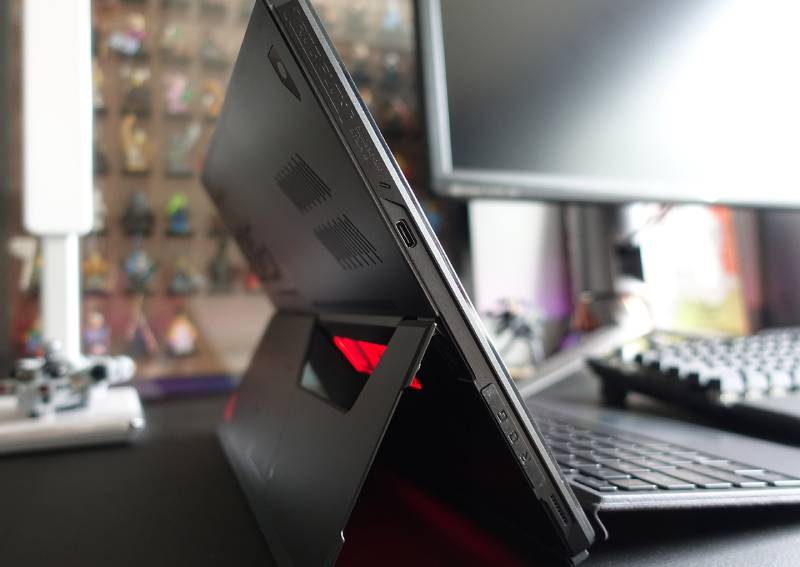 The detachable keyboard comes in a soft base that makes it noticeably flexible and I found that to be a little bit disconcerting after prolong usage. That said, I found the keys on the Flow Z13 keyboard to be enjoyable to type on — thanks to the high key travel. It’s also got RGB, but for some reasons it doesn't always turn on. It’s a reminder that my sample is an engineering unit, not a retail one.

In my time spent with the Flow Z13, I’ve tried using it for some of the functions that I normally used my iPad Air (my morning news and emails) and home laptop (doing actual work) for. It’s certainly not a replacement for either of them. 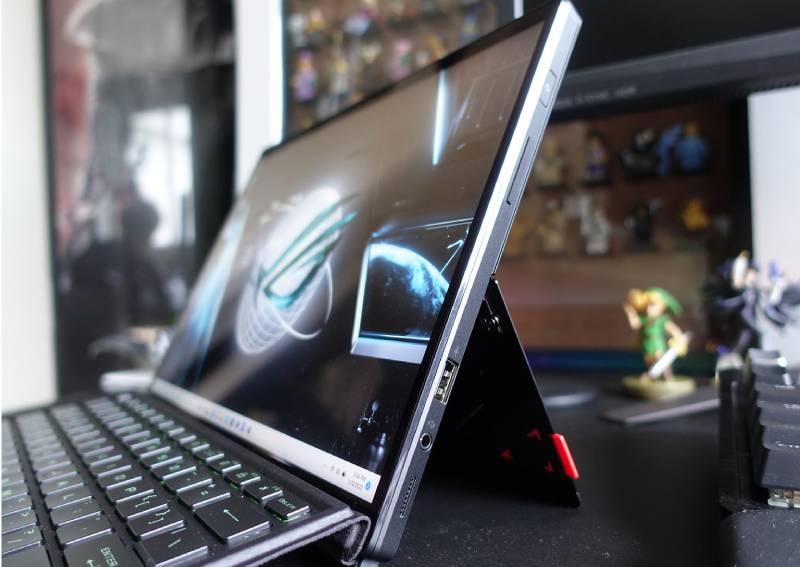 For one, it’s too heavy to be my tablet replacement and secondly, the keyboard just can’t quite match up to normal laptop’s more stable keyboard. But I do see a gaming audience who wants something in between that can also play some of their favourite games at the same time.

Stay tuned to our review of the ROG Flow Z13, which will include benchmark numbers, as soon as our retail sample arrives.