Workers in protective suits stand at an entrance to a university's residential area under lockdown following the coronavirus disease (Covid-19) outbreak in Xian, Shaanxi province, China on Dec 20, 2021.
PHOTO: Reuters
PUBLISHED ONDecember 29, 2021 9:03 AM

BEIJING - A lockdown of 13 million people in the Chinese city of Xian entered its seventh day on Wednesday (Dec 29), with many unable to leave their residential compounds and virtually dependent on deliveries of necessities as new Covid-19 infections persisted.

Xian reported 151 domestically transmitted infections with confirmed symptoms for Tuesday, or nearly all of the 152 cases nationwide, bringing the total number of local Xian cases to nearly 1,000 during the Dec 9-28 period. No cases of the Omicron variant have been announced in the city so far.

While the Xian outbreak is small compared with outbreaks in many other places around the world, officials have imposed tough curbs on travel within and leaving the city from Dec 23, in line with Beijing's drive to immediately contain outbreaks as they appear.

People in the city have not been allowed to leave town without clearance from their employer or community authorities.

A 32-year-old mechanic went to Xian on a business trip and had planned to leave last week, only to find he had to stay for longer after local community officials refused to grant the certificate to clear his departure.

That means he has missed his wife's birthday and might be forced to spend the New Year in Xian. "I just want to go home," he told Reuters on condition of anonymity.

Since Monday, the Xian government has suspended granting permission to people seeking to leave their homes to buy essentials, as epidemic containment measures rose a notch.

The city said in-person shopping could be resumed for people in less risky areas once mass testing returned negative results, without saying exactly when stay-at-home orders would be lifted.

The measure stirred complaints on social media from some residents about the uncertain access of fresh produce. 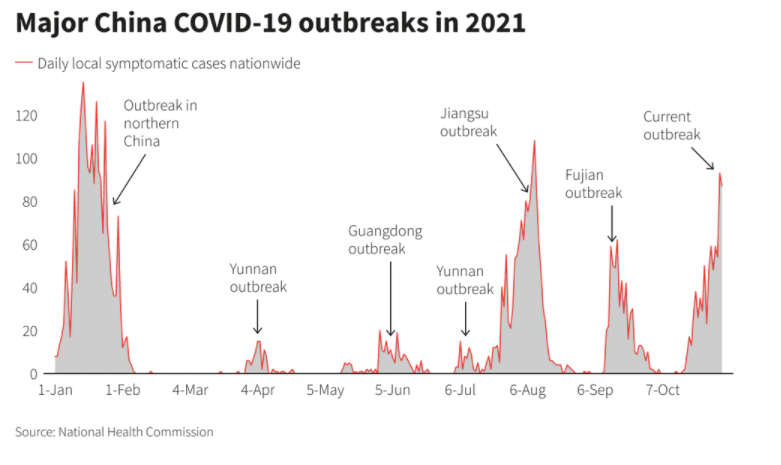 Authorities also started a new round of city-wide testing on Wednesday.

Samsung, which operates a sprawling semiconductor base in Xian, said on Wednesday that it has decided to "temporarily adjust operations" at its manufacturing facilities in the city due to the Covid-19 situation there.

Chinese electric vehicle company BYD Co reiterated on Wednesday that the virus had caused some impact, without giving a time line on when operations may normalise.

"Our production has been affected by the epidemic outbreak to some degree," BYD told Reuters. "We are currently actively making adjustments in response."

There were no new Covid deaths in mainland China for Tuesday, leaving the death toll at 4,636.

Mainland China had 101,683 confirmed symptomatic cases as of Tuesday, including both domestic cases and infections brought in from abroad.