In 2000, then US president Bill Clinton famously said in a speech that he was confident the rise of the internet would push China towards democracy.

“There’s no question China has been trying to crack down on the internet,” he said. “Good luck. That’s sort of like trying to nail Jell-O to the wall.”

And “nailing Jell-O to the wall” is something the nation, which now accounts for about a fifth of the world’s internet users, seems to have excelled in.

Since the 1990s, the Chinese government has built and used the so-called Great Firewall , a sophisticated system that prevents people from accessing unwanted foreign websites and social media, including Google, Facebook, Twitter, YouTube and most mainstream Western news outlets. The South China Morning Post website is also blocked on the mainland.

When President Xi Jinping came to power in 2012, he immediately attached great importance to internet development and governance, urging cadres to command the modern tool to safeguard the ruling Communist Party and expand its influence in international cyberspace.

Under Xi’s watch, the Great Firewall has been fortified and other surveillance tools added to toughen internet censorship.

These include the Great Cannon , which was launched in 2015 to alter and replace online content, according to a report by researchers led by Bill Marczak of the Citizen Lab at the University of Toronto. In addition, China passed laws to tighten control over the internet.

In January, the party published a book of remarks Xi had made since 2013 about the internet, highlighting China’s “historic achievements” in cyberspace administration and development and claiming that the internet was bringing an “unprecedented impact on sovereignty and security”.

With more than 70 per cent of China’s 1.4 billion people relying on the internet for work, consumption and entertainment, the government has vowed to increase people’s “sense of fulfilment, happiness and security” by providing a high-quality internet service and becoming a cyberpower by 2035.

Ultimately, China will become a country with “advanced technologies, a developed internet industry and indestructible cybersecurity which is good at attack and defence, and with strong internet governance capability”, Zhuang Rongwen wrote in the latest issue of Communist Party journal Qiushi.

Zhuang is deputy director of the party’s publicity department and head of the Cyberspace Administration of China.

“Very few ruling parties in the world are as active as the Communist Party of China in adapting to the information revolution trend and emphasising the development and governance of internet,” he said.

“Very few country leaders are as sensitive and insightful as President Xi, who has a sober understanding and thorough thinking of the internet.” 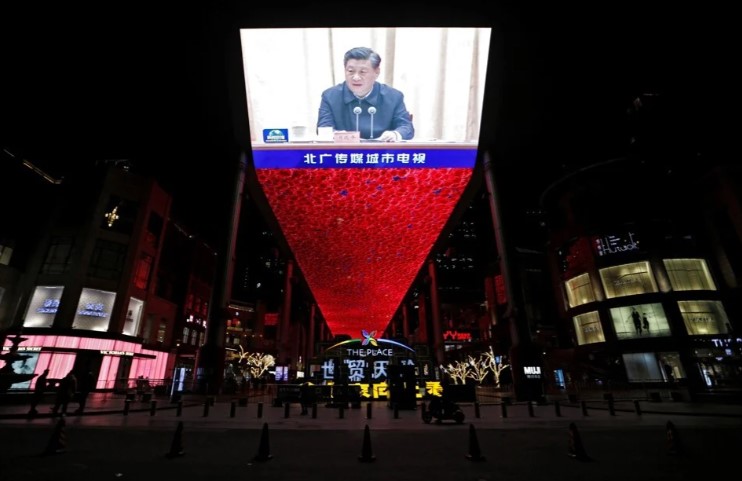 Adam Segal, director of the digital and cyberspace policy programme at New York-based think tank, the Council on Foreign Relations, said: “When Beijing talks about becoming a cyberpower, it is referring to domestic regulatory capability, technological autonomy and the ability to shape the global governance of cyberspace. It has made progress on all these fronts.

“Compared to a decade ago, when they felt under attack, Chinese leaders must now believe that they will continue to be able to shape the internet to their interests,” he said.

“It developed a combination of regulation, repression and technology that not only effectively controlled the flow of information but also prevented netizens from using the web to organise protests.”

The Chinese leadership went further to argue that national governments had the ultimate right to control the internet within their borders, trying to silence criticism from the West.

Addressing the 2015 World Internet Conference in Wuzhen, in eastern Zhejiang province, Xi promoted what he called “cyber sovereignty”. He asserted that individual countries should have the right to “independently choose their own path of cyber development, model of cyber regulation and internet public policies”.

China’s cyber sovereignty efforts have both domestic and international components and will result in an internet that will be less open and free, according to Segal, reflecting a widespread disillusionment with the spread of disinformation, threats to privacy and the concentration of economic and political power by big technology firms.

Chen Daoyin, an independent political analyst and former Shanghai University professor, said the outcome of the internet tussle between China and the West exemplified that “openness can be penetrated, modified and even replaced by closeness”.

“While two decades ago the US and other Western countries had a Chinese dream – accepting and integrating with China to make it change – China’s practices had crashed the dream,” he said.

“That follows the logic of competition between open and closed societies which has been repeated many times in world history and China’s history. The closed society remains unchanged, undefeated, withstanding attempts from the open society to challenge it.”

Steve Tsang, director of the SOAS China Institute at the University of London, said the Communist Party used the internet to defend its “anti-democratic system” by tightly controlling it.

“There is no doubt that despite all the restrictions and controls on the internet imposed by the Chinese state, ordinary people in China [are] empowered in commercial and social terms by the internet, at least in the sense of what they can do now that they could not in the pre-internet era,” he said.

“However, the biggest beneficiary is the party, as it uses the internet to impose much tighter control and surveillance of the Chinese people wherever they are, in a way that was unthinkable in the pre-internet era without reintroducing a full old-fashioned totalitarian system.”

The internet has brought many benefits to Chinese people, including providing a sense of community in place of robust civil-society organisations. In July 2012, when local officials failed to respond effectively to devastating floods in Beijing , help came from web users who offered their homes and food to stranded flood victims.

And at the height of the Covid-19 outbreak, people under lockdown and lacking essential foods exposed their plight in social media posts to get aid and support from the government and society.

There have also been instances of officials being investigated, or even punished, after online exposure about their excessive wealth or corrupt lifestyle caused a sensation.

However, the flip side has been increased surveillance on Chinese people. Dr Li Wenliang , a 34-year-old ophthalmologist at Wuhan Central Hospital, was reprimanded by local police after he shared information about the new coronavirus with his friends in a social media group.

Li died of complications from Covid-19 in February last year.

In the latest cases, several Chinese citizens have been detained for making what authorities deemed to be inappropriate remarks about soldiers who died in a clash at the China-India border last year.

At least seven people have been punished or investigated, including one outside China, under a law passed three years ago that banned acts diminishing “heroes and martyrs”. The law has been criticised as being a means of silencing people for questioning the official narrative.

In a speech in 2013, Xi articulated his vision: “The internet has become the main battlefield for the public opinion struggle.”

He urged cadres to “occupy the battlefield” – keeping and expanding the “red zones” consisting of mainstream media and “positive voices”, fighting with the “black camp” of negative voices and hostile forces, and turning those in the “grey zones” to red.

The party has mobilised a large number of officials and cadres to censor online content and write comments. It has been frequently reported that the government paid people to censor or steer public opinion.

This widespread belief led to the coining of the expression wumao or “50 cent trolls” but many of the online army’s latest recruits are young, passionate, patriotic, vocal and, they insist, unpaid, sources said.

To make China a cyber superpower, Xi has emphasised strengthening technology research to overcome bottlenecks, as well as to foster and attract talent.

And teachers play an important part in ensuring the younger generation that will help shape the future of the internet are ideologically aligned with party thinking.

“No matter whether the subject is radio electronics or blockchain technology, we are required to embody the party’s values in the daily teaching,” Zeng Liaoyuan, an associate professor of information and communication engineering at the University of Electronic Science and Technology of China, said.

For example, he said he made sure to mention the China-US technology war in his lessons to encourage patriotism among students and motivate them to study harder to help China achieve technology breakthroughs.

“The future will be decided by whether China can create a stable and prosperous environment and whether it can successfully attract high-end talent to come to China,” he said.

But for many people, any concerns about how content on the internet could be shaped or filtered by political forces are secondary to its entertainment value.

Tang Feng, a 32-year-old food delivery worker, said that other than the fact that his job relied on the internet – which facilitates everything from receiving food orders to navigating to restaurants – he watched “funny videos” on his phone to pass the time between deliveries.

“I’m on call 12 hours a day. Without the internet, I’d be killed by the boredom,” he said. “It’s good enough to have a portable entertainment device. I can’t imagine anything better.”