In one universe were candidates and voters, mostly elderly, heading out early to drum up support or cast their ballots. In another, many younger people, seemingly indifferent to the political event, seized the chance to ride public transport for free and have fun elsewhere.

City leader Carrie Lam Cheng Yuet-ngor and her senior allies urged residents throughout the day to vote in the first major election since Beijing overhauled the electoral system to ensure only "patriots" held power.

As part of authorities' push to boost voter turnout, residents were for the first time allowed to use buses, mass transit rail, trams and ferries without charge. 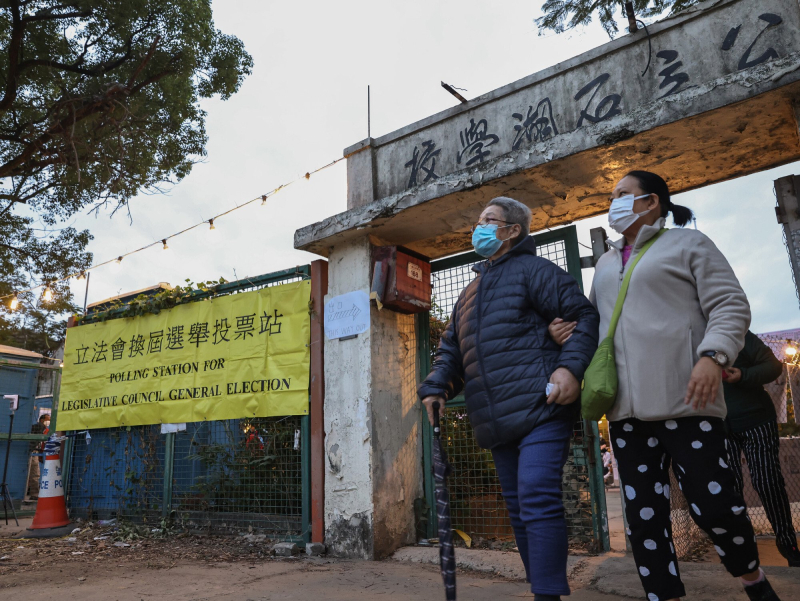 Among the early birds flocking to polling stations in the morning was Gloria Chan, a lawyer in her 40s, who voted at the Sun Yat Sen Memorial Park Sports Centre in Sai Ying Pun.

Describing herself as "loving the country and Hong Kong", Chan said she respected Beijing's electoral overhaul.

At Ying Wa College, a polling station in Kowloon West, dozens of mostly middle-aged or elderly residents cast their votes. Colby Lui, 31, who works in the catering sector, hailed the smooth process.

"There are not many people inside the polling station so I did not need to queue up," she said, adding she was answering calls from officials to head to polling stations.

May Fung Lai-Lin, a 50-year-old businesswoman, said she voted for the first time in more than 30 years. The anti-government protests of 2019 were a turning point, she said, that inspired her to rejoin the political process.

"I vote for Hong Kong's future. I think that Hongkongers should fulfil their responsibility to choose the candidates who help society," Fung said.

Simon Wong, 61, said he was driven to take part by a desire to ensure order was restored following the months of protests that rocked the city.

"I have not voted often, but this year I have a strong will to vote," Wong said outside the polling station at Baptist Lui Ming Choi Primary School in Sha Tin, where only a trickle of older voters could be seen in contrast to the huge lines during the last Legco election in 2016.

The school supervisor added: "I'm so tired of the chaos and violence over the past two years, that's why I want to vote. I hope the elected candidates can bring Hong Kong back to order."

This time around, there are no candidates whose main purpose is to oppose said Thomas Ng, voter.

Nurse Rainbow Ng, together with her husband, cast her ballot at a polling station inside Tsuen Wan Sports Centre at around 6pm before heading elsewhere for dinner. Ng said she too had not regularly voted in the past but the social unrest in 2019 made her change her mind.

"I used to be apathetic. When the protesters started destroying public infrastructure so much that it affected my daily life, I thought to myself, what did I do wrong?" she said.

"This time I feel like I need to stand up and speak for myself."

The 48-year-old said she was not too concerned about how many people turned out to vote and was focused on the quality of candidates.

Referring to an incident where former lawmaker Ted Hui Chi-fung, now a fugitive in self-exile overseas, threw a rotting plant in the Legco chamber, her husband Thomas Ng said: "Since when did Hong Kong politicians start becoming so barbaric?

"This time around, there are no candidates whose main purpose is to oppose. These candidates are really here to serve for the good of Hong Kong," he said.

But many younger people appeared more interested in making use of the free travel on the MTR, buses and trams than in voting.

In Causeway Bay, Peter Chan, 28, had plans to have lunch with friends, after deciding against voting this time because of the lack of opposition candidates.

"This means that this election has low representation. So I have no motivation to take part," he said. 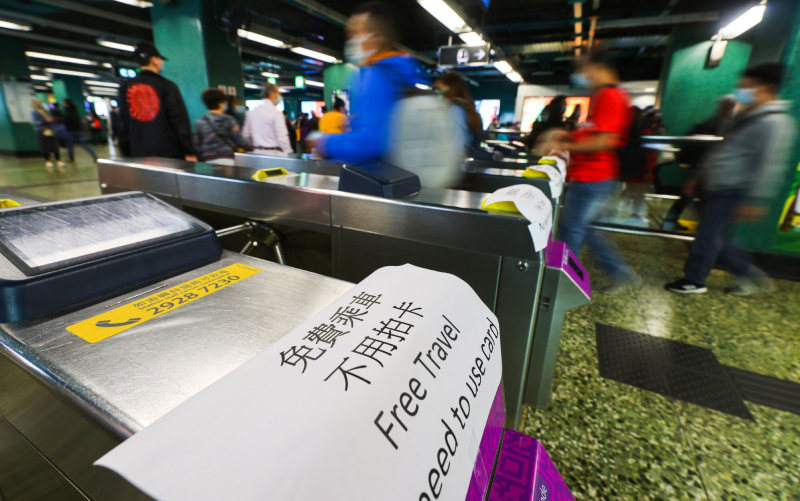 The mood was more or less the same at a packed coffee shop in Kennedy Town, where Esme Chan, 28, said she and her three friends were having a "picnic day" as they travelled around the city on the MTR.

Referring to new rules allowing only candidates deemed "patriots" by a vetting committee, the opposition supporter said: "They don't allow the people who they don't like to enter. So how do we vote for the people we want to choose?"

Daniel and his friend John, who preferred to be identified only by their first names, said they had been all over Hong Kong, from Lantau Island to Kennedy Town, taking advantage of the free travel.

Neither had plans to vote, saying the new system only allowed "one voice".

Looking up at the cloudy sky, Daniel, a 26-year-old social worker, said the weather was an apt reflection of his mood. "There is no hope," he said.

John, 23, who works in the innovation and technology sector, echoed Daniel's views and said he was thinking about emigrating to Canada.

The Ocean Park tourist attraction also drew a steady stream of visitors. One 30-year-old woman who gave only her last name, Sham, said she had no plan to vote, although she had taken part in every other election since turning 18.

"I wanted to ride the MTR for free and find a place to go and breathe some fresh air," the accounting clerk said.

"I think if all the parties in the election have the same stance, I don't see the need to vote. The government has picked all the political parties for us. We can't even choose, so why do I need to choose?" 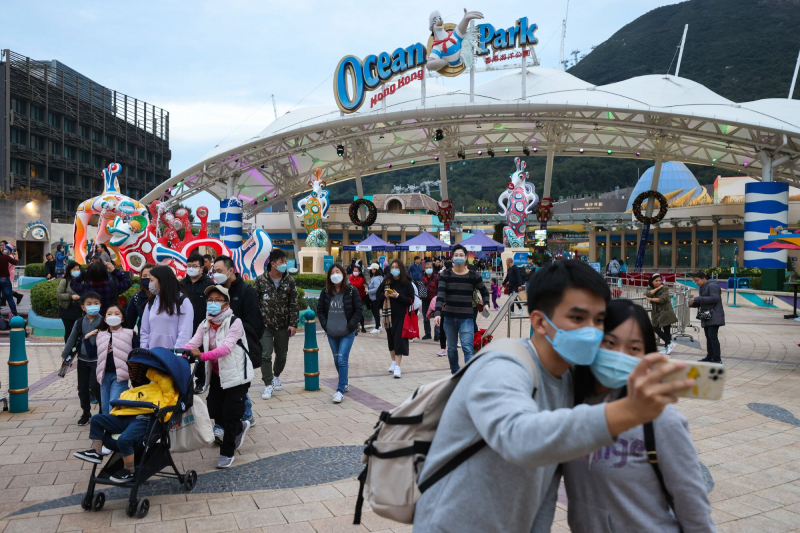 In the Hong Kong Island West constituency, retired businessman Richard Hui, 61, was supporting pro-establishment candidate Regina Ip Lau Suk-yee. He admitted "a divide between generations" might have led some young people to steer clear of the poll.

"Young people have their own thinking. We senior citizens have ours," he said.

Toby Cheung, 27, said she had voted in the Good Night Show, a talent show organised by ViuTV, as well as the Ultimate Song Chart Awards Presentation held by Commercial Radio, but she was not interested in choosing a lawmaker.

"I think many of us follow the show and music awards closely in our daily life. That's why we throw ourselves into it," she said. "But there are not many choices among the Legislative Council candidates."

"I feel like my vote wouldn't change things, though I know I should vote" said college student, 21.

In Kwun Tong, young couples and families jostled in line to take their pictures against the backdrop of a massive Christmas display, including brightly lit trees and statues of animal characters, at the APM mall.

A 21-year-old college student, who declined to be named, said she felt ambivalent about voting and spent the day with her boyfriend instead.

"Honestly, I don't know enough about the candidates," she said, adding: "I feel like my vote wouldn't change things, though I know I should vote."

MTR Corp staff put up notices at all stations reminding passengers that no fares would be collected. But some domestic helpers enjoying their day off appeared initially confused by the free-ride announcement made in Chinese before realising they did not need to pay.

Admiralty, one of the city's busiest rail interchanges, was even more crowded than usual. Hundreds of passengers waited to board trains at the station, which connects the Tsuen Wan and Island lines. "It's even busier than the rush hour on weekdays," one passenger said.

As part of the election day arrangements, authorities set up a system for voters to check the expected queuing time at each polling station. But it was out of service just one hour after the stations opened at 8.30am "due to excessive usage".

The system was restored only at 4.15pm, when crowds of merrymakers had taken over many parts of the city.

Hong KongELECTIONSvotersPolitics and Government
Share this article
This website is best viewed using the latest versions of web browsers.