The melee in Central was captured on camera.
Facebook

Police have arrested five Hongkongers over a weekend brawl captured on video in the Lan Kwai Fong nightlife hub that was sparked by a row between a partygoer's girlfriend and his ex-partner.

Four women and a man were on Tuesday detained on suspicion of fighting in a public place, an offence punishable by up to a year in jail and a HK$5,000 (S$875) fine under the Public Order Ordinance.

The violence broke out on D'Aguilar Street in Central at about 3.45am on Sunday when the 29-year-old merchant, his current lover, also 29, and their friends bumped into his former girlfriend, 26, and the group she was with outside the LKF Tower.

A police source said the brawl followed a heated argument between the two women. The businessman and the younger woman broke up about half a year ago.

In a video clip widely viewed online, at least five women were seen punching and kicking each other in a melee lasting nearly three minutes that drew a crowd of onlookers. Several men were also seen fighting each other.

The footage showed one of the women pulling another's hair before they both fell to the ground. Staff from nearby pubs tried to mediate but in vain. 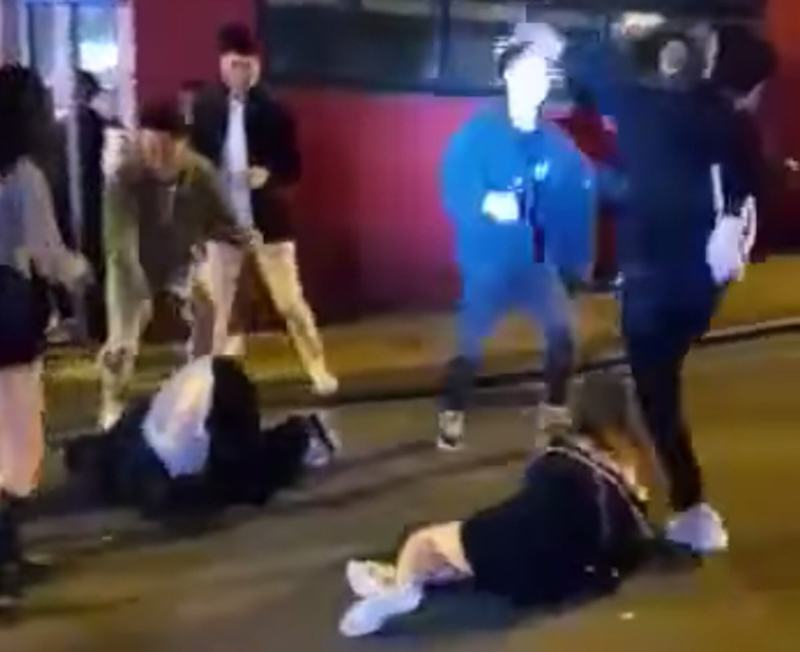 The man's current and former lovers called police separately that same day after leaving Lan Kwai Fong. They both suffered bruises and abrasion in the brawl and were treated at Queen Elizabeth Hospital in Yau Ma Tei and Caritas Medical Centre in Cheung Sha Wan.

The five arrests were made on Tuesday after police checked surveillance camera footage to gather evidence.

During a house search, officers seized the clothing worn by some of the suspects at the time of the fight.

A police spokesman said the suspects — aged between 24 and 29 — had been released on bail pending further investigation.

The source said officers were still searching for at least two more people in connection with the fight. The Central district crime squad is handling the case.