Mass-participation sporting events returned to Hong Kong after a hiatus of more than 18 months with the running of the Standard Chartered Hong Kong Marathon on Sunday (Oct 24), though the race was marred by injuries and accusations of censorship of political slogans.

The event was not only the first of its kind since the outbreak of the Covid-19 pandemic, but also the first since the implementation last year of a Beijing-decreed national security law, which has seen some previously tolerated forms of expression effectively criminalised.

Several entrants on Sunday complained they had been told to cover up tattoos, logos or slogans on their clothing or be banned from the race after organisers warned they would reject runners who broke Hong Kong laws or the event’s rules.

According to the organisers, more than 400 people were also injured during the event, including at least 20 who needed to be hospitalised, with one in critical condition. Some of those who required medical care were suffering from high body temperatures and sprains.

In 2019, the last time the race was run, just 15 people were sent to hospital from a pool of runners that was nearly 3½ times the size of Sunday’s crowd.

Some 18,500 elite and amateur athletes took to the streets of Kowloon and Hong Kong Island to compete in Sunday’s event, with eyes on the finish line at Victoria Park amid new hurdles on a new route and extra health requirements.

Before they could line up, participants had to provide a negative Covid-19 test and proof of vaccination, with anti-pandemic measures forcing organisers to curb the number of entrants.

One male runner with a tattoo on his leg reading “Hong Kong add oil” – a common Cantonese phrase of encouragement – was reportedly asked to cover it with a bandage before racing while several other entrants were turned away or told to get changed because of similar issues with their clothing.

One woman told the media she was stopped from running after organisers took issue with a “Hong Kong” logo on her shorts. The font of the logo bore a resemblance to one that was widely used in the anti-government protests in 2019, when shouts of “add oil” were also common. 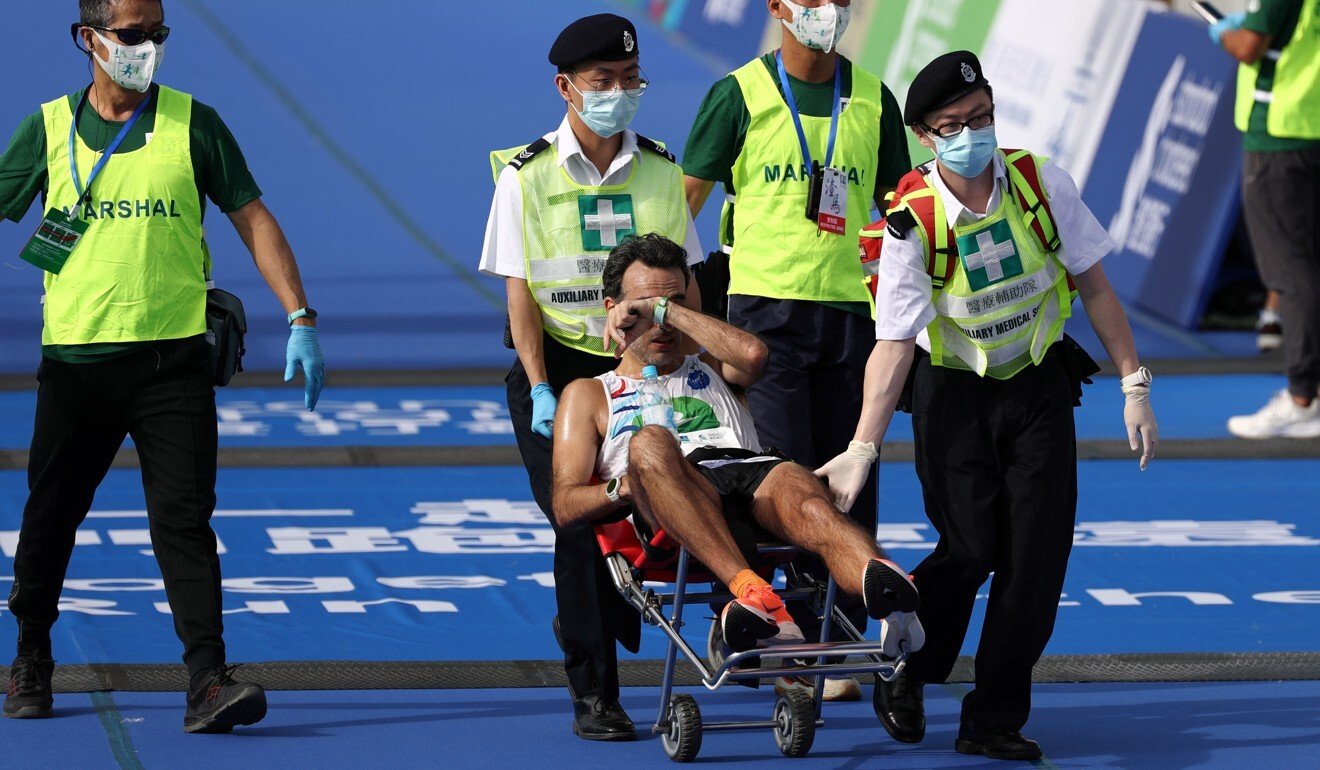 There was a lack of clarity on the matter at the finish line, with race volunteers saying they had been given no instructions on preventing runners from competing based on their clothing.

The ambiguity was in keeping with the build-up to the race, with organisers maintaining they bore no responsibility for runners falling foul of the national security law, only to then come under pressure from government officials to take a firmer stance.

Organisers did not answer questions on the number of people deemed to be wearing unsuitable clothing, or whether any had been reported to police.

Asked why certain slogans were deemed objectionable, organising committee chairman William Ko Wai Lam said: “The Standard Chartered Marathon is a sporting event, it should not have any political element.”

On Saturday, the police force said it would send its elite Counter Terrorism Response Unit and Railway Response Team to man the race routes to guard against any attack. In addition, railway district officers and MTR staff would carry out a joint operation to search for dangerous goods inside stations, the force said.

Police also confirmed they would collect evidence and follow up if necessary on any cases of runners breaking the law.

The force later said it had not received any reports of laws being violated during the event.

Civil service chief Patrick Nip Tak Kuen, who took part in the men’s half-marathon, praised the smooth organisation. Addressing complaints by runners about clothing issues, he said all participants had to abide by the organiser’s rules.

“It is the most important principle for every participant to be sportsmanlike and the event to be held smoothly,” he said.

Nip also said the event’s return was a sign of the city’s success in controlling the pandemic.

“It is great that we can hold large-scale events under strict anti-pandemic measures,” he said, adding the government would support future sporting occasions on condition pandemic controls were followed. 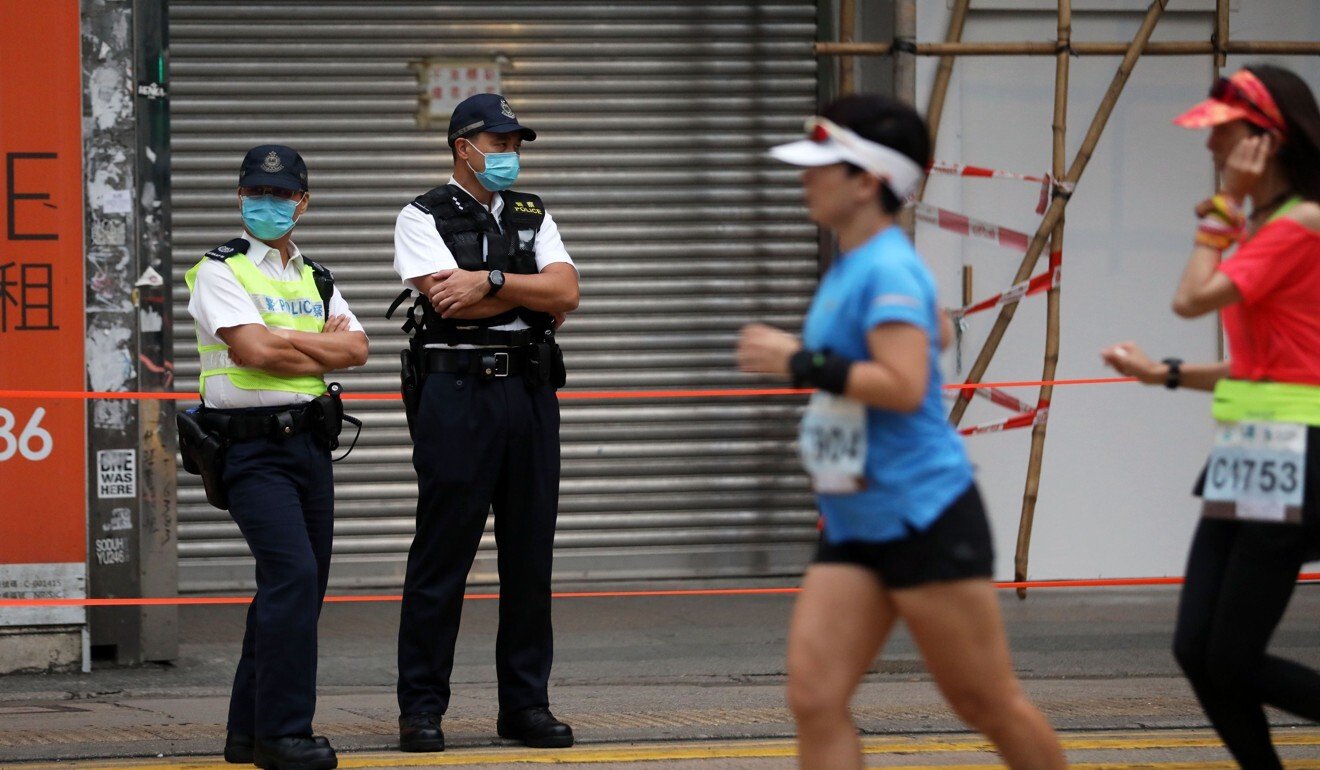 This year’s event was also the first time since 1997 – when Standard Chartered began sponsoring the showpiece – that there were no invited foreign runners.

That meant podiums were dominated by Hongkongers, with triathlete Wong Tsz To the first to cross the finish line at Victoria Park after winning the men’s 10km contest.

Wong was among the first to start – the 10km kicked off the day’s races at 5.45am – as the men’s elite runners set off along the new route through the Western Harbour Tunnel. It was still dark when Wong won the shorter event ahead of Tokyo 2020 Olympian Oscar Coggins.

There was an increased police presence in and around Victoria Park and a subdued atmosphere at the finish line, where runners were hurried along to the exits by volunteers. The streets leading up to the finish, often packed with crowds in previous years, were also eerily quiet as the runners headed for home. 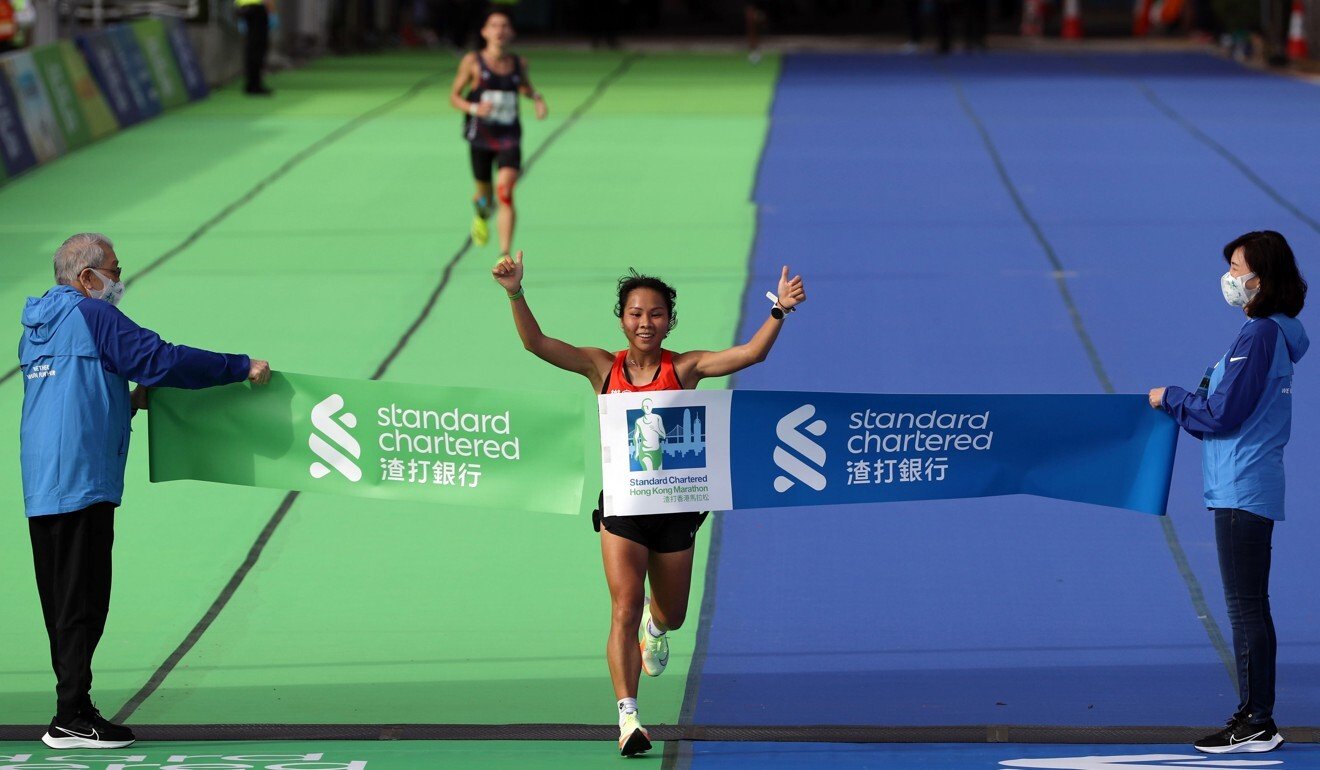 Those who did gather cheered on local favourite Christy Yiu Kit Ching as she won the women’s marathon. The victory capped a difficult year for the elite distance runner, marking her first win at her home event.

Yiu had missed out on the Tokyo Games after failing to meet the qualifying criteria, largely because travel restrictions put in place for the pandemic had prevented her from racing.

MarathonsCensorshipSportsWounds and injuries
Share this article
This website is best viewed using the latest versions of web browsers.