Hong Kong's leader on Tuesday stopped short of saying the annual vigil commemorating the Tiananmen Square crackdown would be banned going forward under the national security law, but emphasised it was the city's obligation to respect the ruling Chinese Communist Party.

Chief Executive Carrie Lam Cheng Yuet Ngor offered a measured response when asked about the issue just hours before the event's organisers formally applied for a letter of no objection from the police commissioner for the planned rally on Friday (June 4).

The candlelight vigil in Victoria Park has been the only large-scale public commemoration of the bloody 1989 crackdown in Beijing on Chinese soil. But the upcoming edition, which would mark Tiananmen's 32nd anniversary, would be the first since Beijing imposed its sweeping national security law on Hong Kong last June.

Beijing loyalists and scholars have previously warned that event organiser the Hong Kong Alliance in Support of Patriotic Democratic Movements of China had already run afoul of the new legislation, as its manifesto explicitly calls for an "end to the one-party dictatorship". 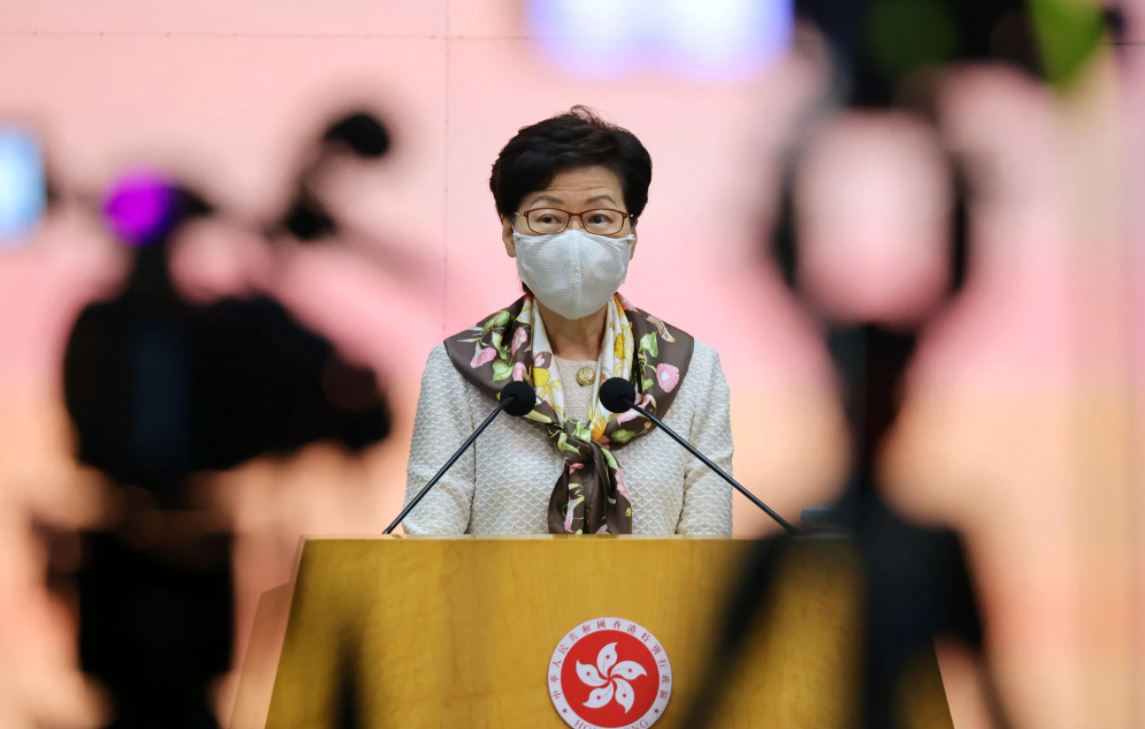 When asked about the administration's view of the vigil's legality ahead of her weekly Executive Council meeting, Lam said: "It depends greatly on what is going to happen at the gathering, whether participants fall into offences prohibited by the national security law."

Lam further stressed that the high degree of autonomy Hong Kong enjoyed under the "one country, two systems" principle was not "comprehensive and absolute", adding the city must respect the country's constitution.

"The constitution clearly spells out that socialism with Chinese characteristics is led by the Chinese Communist Party," she said.

"[Therefore] with the premise that we should respect the constitution, we should also respect the ruling Chinese Communist Party."

Whether disrespect for the party constituted a crime, however, would depend on the relevant laws, evidence and actions taken, she added.

Last year, the force banned the annual candlelight vigil for the first time in 30 years, saying that "public assemblies were a high-risk activity" given the coronavirus crisis.

Thousands of residents defied the ban and flooded Victoria Park all the same, with some also lighting candles at small-scale vigils held across the city.

On Monday, pro-establishment newspaper Sing Tao Daily cited sources in suggesting the force was likely turn down the application for a second year in a row on the grounds of the "unstable Covid-19 epidemic situation".

The alliance's secretary, Richard Tsoi Yiu Cheong, previously said it would be "politically motivated" if the event was banned, urging the police force to uphold the freedom of assembly guaranteed under the Basic Law, the city's mini-constitution, in considering each applicatio​n. ​

Hong KongLaw and legislationCommunism
Share this article
This website is best viewed using the latest versions of web browsers.