Hong Kong’s leader has ordered an investigation into the conduct of 13 senior officials who attended a birthday party where they were exposed to coronavirus-infected guests, embarrassing her government in the middle of an Omicron outbreak.

Chief Executive Carrie Lam Cheng Yuet-ngor announced on Friday night she was suspending them from their duties during their 21-day quarantine for which they would also have to use their own leave.

Earlier on Friday, the scandal escalated dramatically as authorities ordered all 170 attendees to quarantine at the government’s Penny’s Bay facility after a second guest tested positive for Covid-19. They confirmed the first suspected case and identified a second preliminary infection linked to Monday’s party for the 53rd birthday of Witman Hung Wai-man, a local delegate to the national legislature. 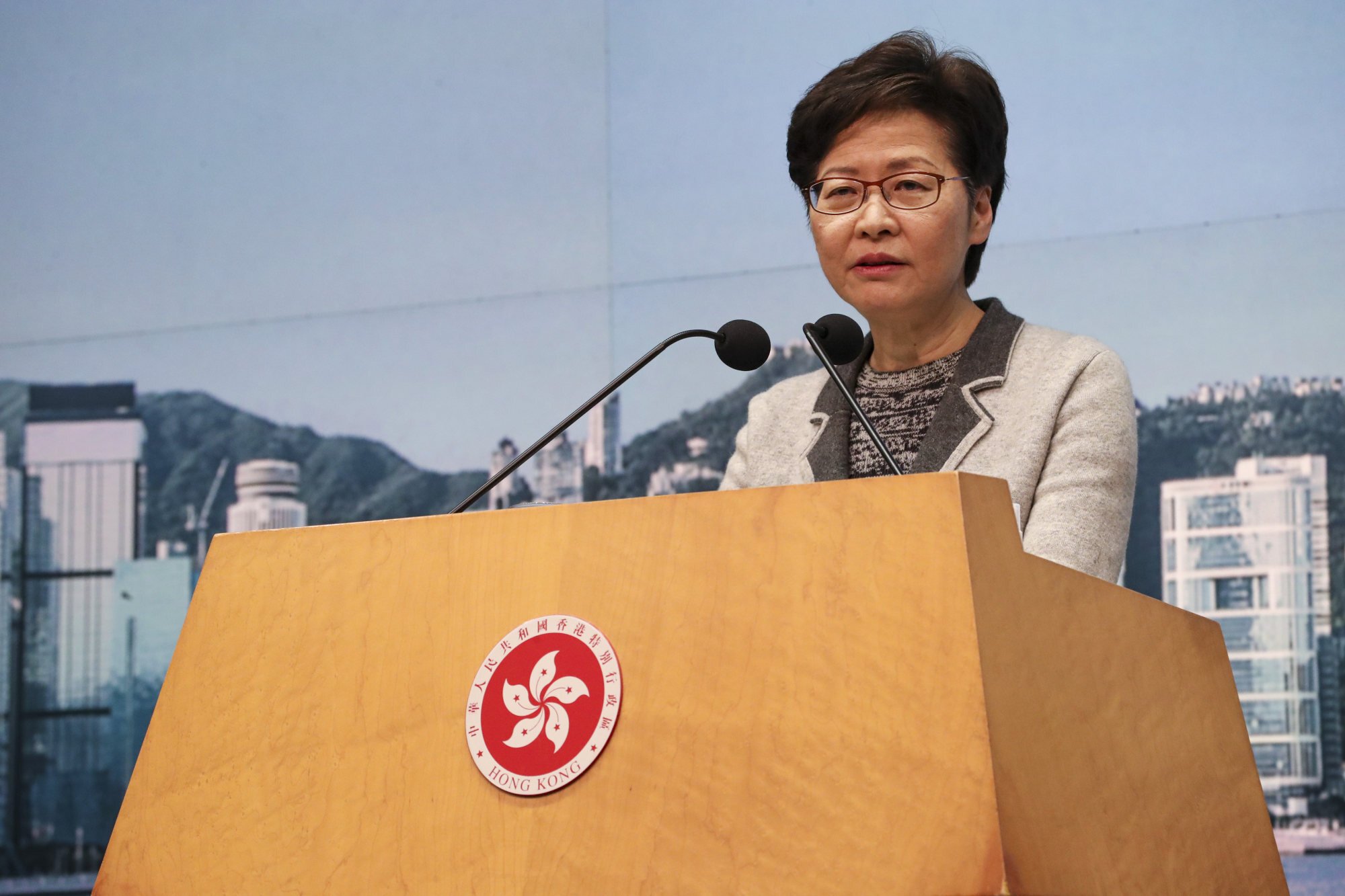 The widening public health scandal erupted as experts warned the city was facing an exponential growth in Covid-19 cases sparked by the Omicron cluster, with invisible transmission chains highly likely.

On Friday night, Lam, who a day earlier had expressed “deep disappointment” over the officials, announced that she was starting investigations into the 13 who attended the party, including the police, immigration and anti-graft chiefs.

Lam also said the officials were deemed unfit for work and would have to use up their own leave for the duration of their 21-day quarantine.

The remit of the investigation would be to uncover their arrival times at the party, the duration of their stay and their behaviour, including whether they had used the official “Leave Home Safe” risk-exposure app and wore masks.

ALSO READ: How to calculate vaccination validity? Answers to questions on Covid-19 booster jab and more

Lam added that the health authorities would investigate the restaurant, its staff and customers over the enforcement of social distancing.

The birthday party held at Spanish restaurant Reserva Iberica in Wan Chai and lasting six hours – from 6pm to midnight – has drawn Lam’s wrath for flying in the face of the government’s own advice for the public to avoid large gatherings during the Covid-19 crisis .

But pro-establishment lawmakers hit back on Friday, blaming the administration instead for not doing enough to contain the virus and plugging existing loopholes.

It also emerged that one of the party-goers, lawmaker Junius Ho Kwan-yiu, met top Beijing official Xia Baolong in Shenzhen two days after the event. Ho had tested negative before the meeting. 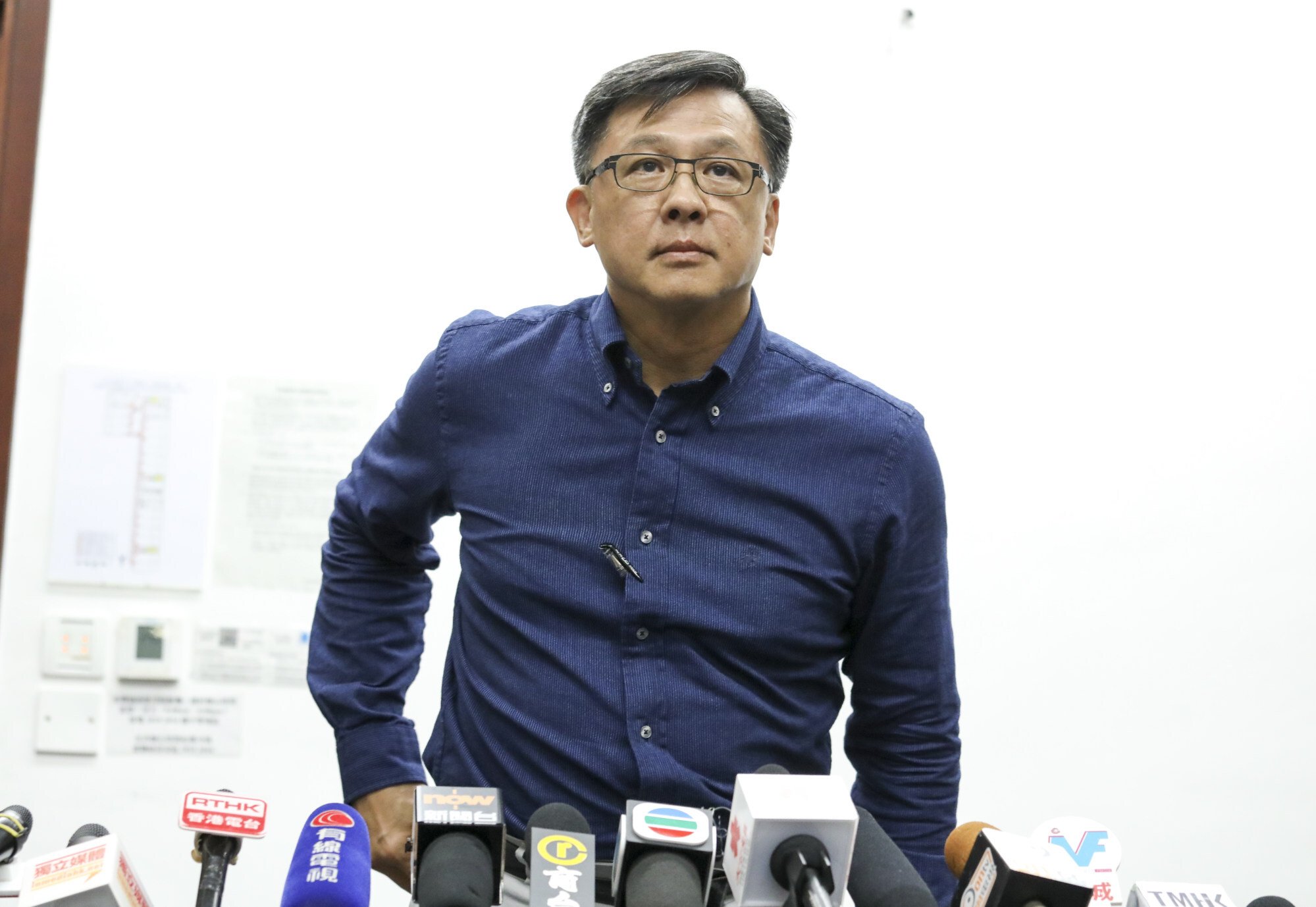 Everyone who attended the party – including home affairs chief Caspar Tsui Ying-wai and 20 legislators – has been ordered to spend up to 21 days in Penny’s Bay after being classified as close contacts of cases.

An unspecified number of family members of those at the party would also have to be quarantined for four days, health authorities said.

The Centre for Health Protection (CHP) confirmed on Friday that a 37-year-old woman who lived in Causeway Bay and attended the party was the first person to be infected.

The patient’s mother had earlier dined with a friend who was infected and unvaccinated. The woman, a member of the youth committee of the Chinese Manufacturers’ Association, worked at Wing Yuen Tea House on Peel Street in Central.

Joyce Yeung, 53, host of a Mandarin programme at public broadcaster RTHK, is the second infected person at the party.

She tested preliminary-positive on Friday, and RTHK staff were told to leave its Kowloon Tong headquarters by 6.45pm ahead of the entire building being disinfected and closed for 24 hours. A source said she attended the party with her husband, a doctor, and had dined out with three colleagues on Thursday.

Dr Chuang Shuk-kwan, head of the CHP’s communicable disease branch, said the second woman arrived at the party at around 6.30pm, left at about 8pm, returned at 9pm and then left for good before 9.30pm. Chuang said the woman removed her mask to eat and drink at the party. The 37-year-old confirmed case had arrived at the party around 9.30pm, initially leading to only the attendees present after that time being deemed close contacts. However, officials said she had a high viral load, and with the discovery of the second case, the net was widened to include all attendees. The second case had already had three Sinovac shots and was asymptomatic.

“The attendees took off masks to eat and drink, they also didn’t stay in a specific location and stayed for a relatively long period of time. They are now regarded as close contacts of the preliminary case,” CHP controller Dr Edwin Tsui Lok-kin said, explaining why all attendees needed to be quarantined.

The preliminary-positive case’s time at the venue may not have overlapped with the now-confirmed infection, which could indicate another source of transmission, he added.

“Our [analysis] is that anyone who was present at the venue is now a close contact, so our entire quarantine effort is aimed at all participants of the event,” Tsui said.

Lam had on Thursday lambasted some of her top officials for blatantly ignoring the government’s own advice on avoiding large gatherings to party at Reserva Iberica in the middle of a worrying Omicron outbreak.

Au was said to have been unable to account for his movements on Monday evening but Lam did not respond directly to questions as to whether he had scanned the “Leave Home Safe” app as required by law when entering restaurants.

Lam, however, singled out and expressed “deep disappointment” at home affairs chief Tsui, who was sent to Penny’s Bay on Thursday.

On Friday night, Lam said Nip would cover for Tsui while commerce secretary Edward Yau Tang-wah would oversee the Financial Services and the Treasury Bureau while chief Christopher Hui Ching-yu, also an attendee, was serving quarantine.

The other public servants will have their deputies covering for them: ICAC head of operations Ricky Yau Shu-chun will act for Peh; Deputy Commissioner of Police Oscar Kwok Yam-shu will cover for Siu; and Deputy Director of Immigration Benson Kwok Joon-fung will act for his boss Au.

A number of the officials issued statements of apology over their conduct, such as police commissioner Siu, immigration chief Au, the ICAC’s Peh and financial services secretary Hui.

Even as the government raced to contain the fallout from the widening scandal, some of the 20 lawmakers who joined the party – including Ho who met Beijing official Xia subsequently – and who were approached by the Post on Friday, downplayed their role at the event, instead shifting the blame to government officials and airline crews whom they said were responsible for sparking the Omicron wave.

Updating Legco on the latest developments early on Friday, its president Andrew Leung Kwan-yuen said he was assessing the situation to determine whether the new session could still open as scheduled next Wednesday.

He said he was still inclined to proceed with the first meeting of the new Legco term, with Lam expected to attend a question and answer session.

The meeting would go on unless the health crisis situation became “uncontrollable” or the government introduced a citywide work-from-home policy, he said.

Leung revealed he had called up lawmakers one by one to remind them to be honest and cooperative with the investigating authorities.

“Lawmakers should realise that we are living in a fishbowl. What we did will be monitored by the public,” he said. 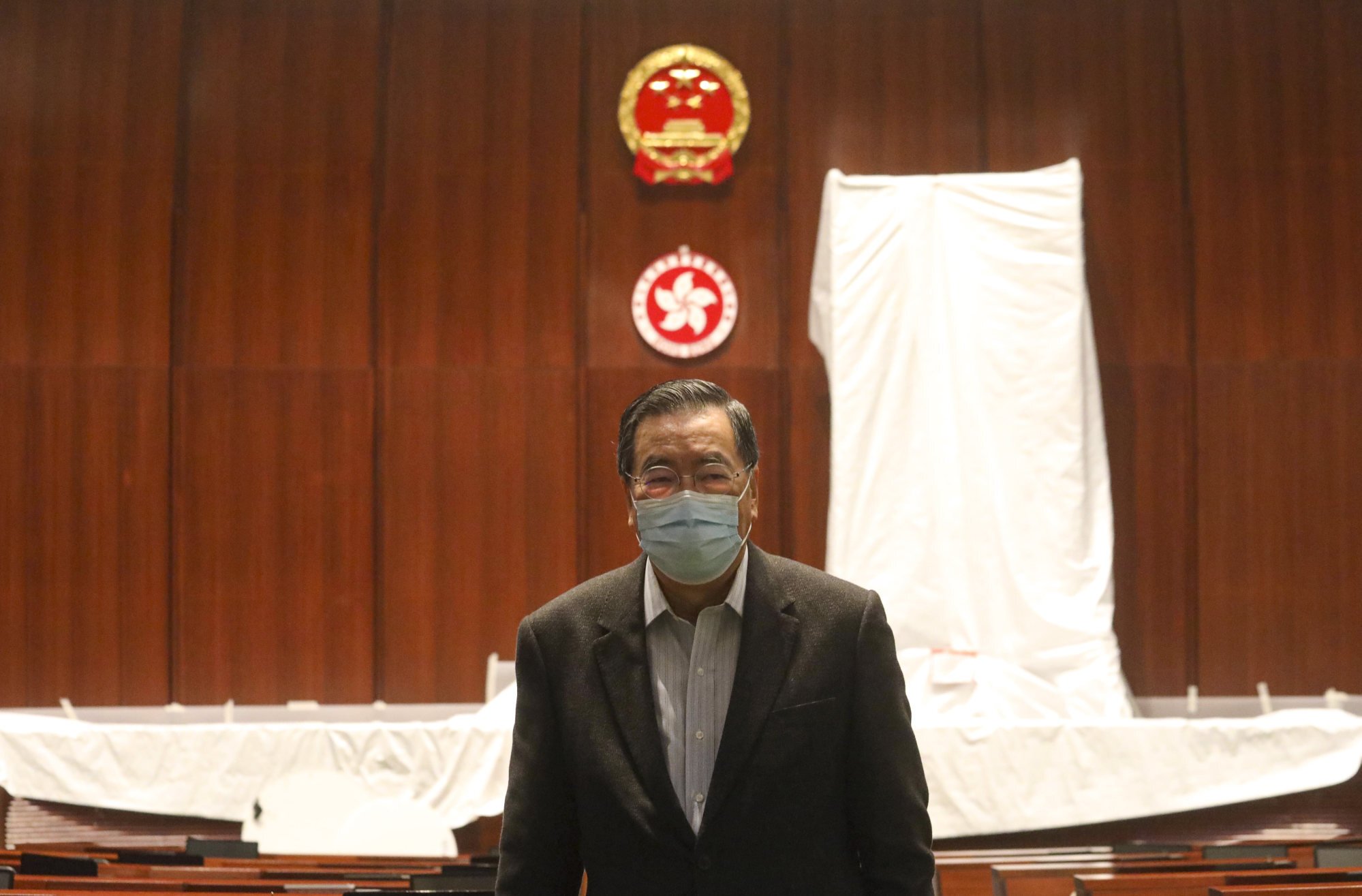 Asked if the legislature would take any disciplinary action against the partying lawmakers, Leung said the rules of procedure only granted the president power to punish members for their “grossly disorderly conduct” within the chamber.

“They have to be held accountable for their own behaviour and actions conducted outside to the members of the public,” he said.

A photo obtained by the Post shows guests not wearing masks, with Hung singing beside an attendee, accountant Ellen Tsang Fung-chu, a member of the 1,448-member Election Committee, which is tasked with picking the city’s leader and sending 40 representatives to Legco.

A study of several photos leaked from the party found the guests fell roughly into four groups: those working in information technology, those calling themselves members of the Y. Elites Association, followed by the Beijing-friendly political camp and the city’s officials.

The guest list reflected Hung’s political career. A seasoned IT professional with the pro-establishment Internet Professional Association, Hung had once taken the helm of the Y. Elites Association, which was formed by the scions of wealthy families and young professionals.

He was appointed to a key post at the Shenzhen Qianhai Authority in 2014, which required frequent dealings with officials, and eventually became a Hong Kong delegate to the national legislature in 2018.

Emil Chan Ka-ho, a member of the Smart City Consortium who was among the party-goers sent to Penny’s Bay on Friday, conceded there was a lack of awareness among the guests, and that the number of people who showed up exceeded his expectations.

“Who would have thought there could be two infection cases – possibly from two sources – in a 170-person party?” he said. “But when you saw even officials were there, it did give you the illusion that it was a safe environment with sufficient precautionary measures in place.”

Instead of pointing fingers at the guests at the party, which was held two days before the tightening of social-distancing measures was announced, Chan argued the government should focus on containing the pandemic by announcing school closures and a work-from-home policy for employees. 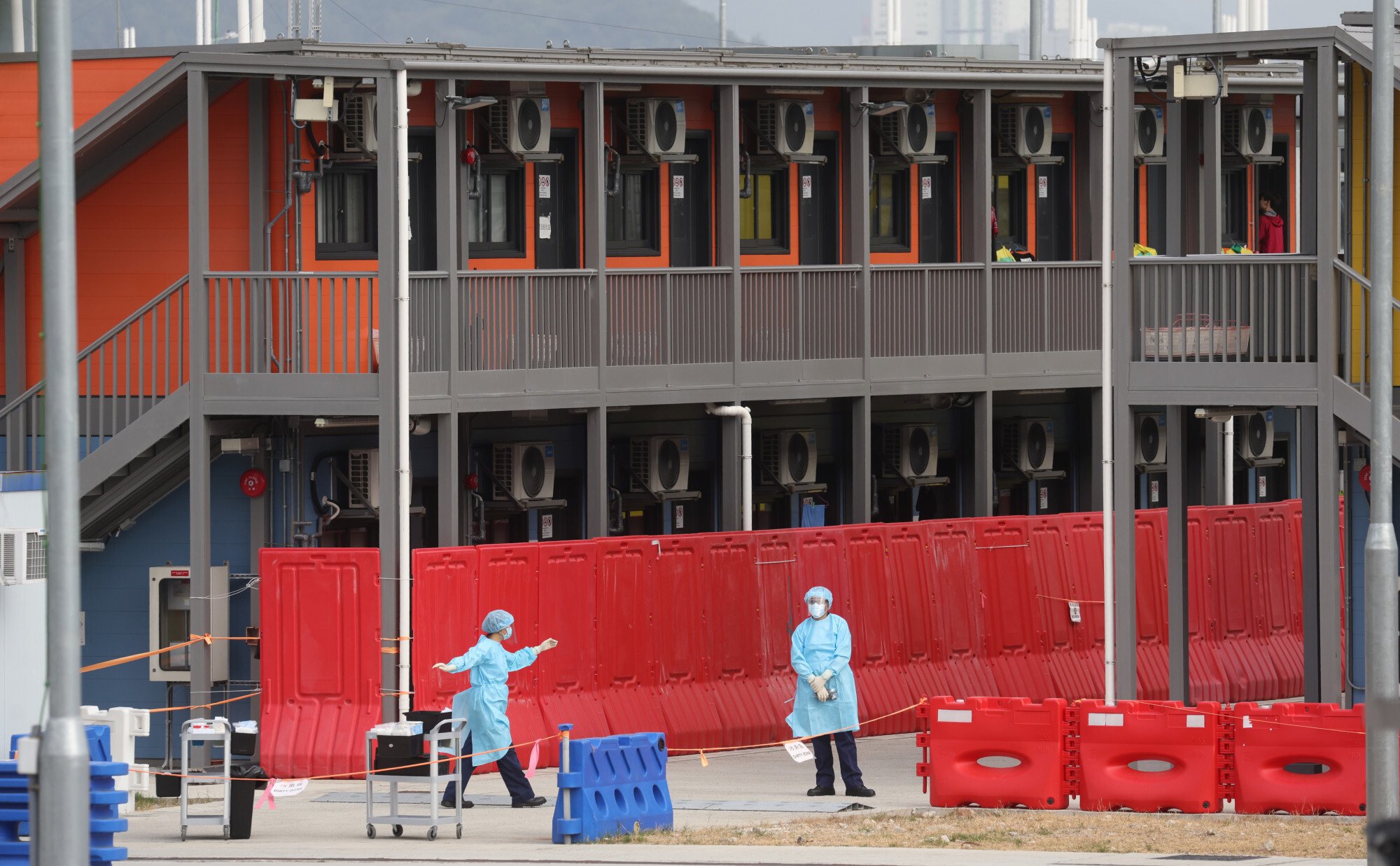 Contacted by the Post on Friday, Hung said he was in Penny’s Bay and busy handling many inquiries from his guests about the quarantine arrangements.

“I am too busy and don’t have time to think about whether I should resign from the Qianhai Authority,” he said.

Political scientist Dr Ma Ngok of Chinese University said the saga had left a bad impression of the government. “It appears the government is asking the public to do a lot while its high-ranking officials are at a loose end,” he said. Meanwhile, health officials are warning of exponential growth in Covid-19 cases and invisible transmission chains spreading in the community, as an Omicron cluster, which originated from a flight attendant returning from the United States and her socially-active mother, had expanded not just to political circles, but also others including a dance group, churchgoing domestic helpers and patrons in two restaurants.

It would take time for health authorities to send more than 350 people, including the party-goers, to quarantine. The health department said they would be given verbal reminders to stay at home before being sent to isolation, an arrangement that an expert said could heighten the risk of community outbreak.

Meanwhile, the Civil Engineering and Development Department admitted that 22 staff members joined a private boat party on Thursday at lunchtime.

A photo circulating on social media showed employees posing for a group picture in front of a yacht holding a banner to celebrate the “promotion” of Michael Fong Hok-shing, head of the Lantau office, to department head. No official announcement on the appointment had been made.

A spokesman said the party was arranged by Fong’s colleagues and he did not know of the event in advance. They had also been reminded to be more alert to pandemic prevention, he said.