Chinese boy, 8, gets pencil lodged in head after being disciplined by father

Driven to frustration over his son's refusal to redo his homework, an angry father struck the child with his bare hands, only to discover a pencil lodged into the back of the boy's head afterwards.

According to Sina News, the "bright but mischievous" eight-year-old boy had completed some revision exercises set by his parents at home that evening.

Unhappy with the child's messy handwriting, the father asked the boy to redo his work, to which he continually refused.

In a fit of anger, the father raised his hand to discipline the boy, Sina reported. The child instinctively raised his arm to block the blow, not realising that he had a pencil in hand. The sharpened end of the pencil ended up lodged in the back of the boy's head from the impact.

Photos released on Weibo showed the pencil tip embedded in the boy's skin at the base of his skull. 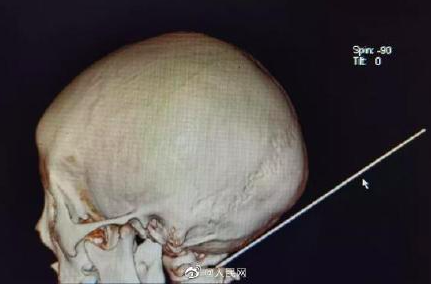 The boy was rushed to hospital by his parents, where medical staff performed emergency surgery.

The report added that according to the neurosurgeon, the pencil had penetrated seven centimetres into the right side of the boy's neck.

It had missed the boy's spinal canal by mere millimetres, said the doctor, an injury that could have caused paralysis. If the object had hit a vertebral artery, it would also have put the boy's life in grave danger.

There was also the danger that pieces of the pencil lead or wood fragments would be lodged in the boy's skin, heightening the risk of infection.

As a result, the wound was rinsed repeatedly during the operation and the boy was given a tetanus shot as well. After being warded for observation in the intensive care unit for a day, the boy was subsequently transferred into the general ward and discharged on Jan 9.

Dr Du Hao, director of neurosurgery at a children's hospital in Wuhan, commented that the boy is "lucky", as the pencil did not pierce through his skull. "Otherwise, the risk of infection would be greatly increased," he added.

In such cases of foreign objects being lodged in the head, Dr Du reminded parents never to remove these objects on their own and that the patient should be sent to hospital as soon as possible. Removing the object abruptly could lead to massive internal bleeding and endanger the life of the patient, said the doctor.

In 2019, two similar incidents were reported in China, both involving toddlers and chopsticks which pierced through their skulls. Despite the gravity of the situation, both children survived.

ALSO READ: Chopstick pierces Chinese toddler's skull after she falls on it

AccidentschinaChildren and Youthhospital
Share this article
This website is best viewed using the latest versions of web browsers.