Xiaohui’s disability certificate. The woman ended up in intensive care after one video prank affected her diabetic condition.
PHOTO: Handout
PUBLISHED ONDecember 25, 2021 3:36 AM

Chinese police have detained three men who took advantage of a 23-year-old mentally disabled woman for a controversial live-streaming show, including teasing her, touching her genitals and forcing her to drink beer and hug and kiss different men.

The three live-streamers surnamed Hu, Xing and Jin, aged 26, 27 and 32 have been detained by police in Changsha, in China’s central Hunan province, police said in a statement on Wednesday.

The victim’s plight was brought to the authorities’ attention following her mother’s earlier appeal for financial help on Weibo to treat her daughter, who has diabetes and ended up in intensive care after being forced to drink five bottles of liquid yogurt in one video.

The mother surnamed Kuang, said the medical bills from the four-day stay in the ICU alone had already reached 56,000 yuan (US$8,791), far more than what her family could afford. She said her daughter has been staying in Changsha for two years, news portal Thepaper.cn reported.

Kuang said that her family was unable to take care of her daughter full-time at home because her husband is in his 70s. And she works in another city as a cleaner and the couple have another child who is mentally ill that they care for at home.

The daughter, with the surname Yang, was targeted by the live-streamers because of her disability, the report said. The woman, called Xiaohui online by internet users, was told to hug and kiss different men, some of whom were topless and made to touch her genitals in the live-streaming show.

The men around her laughed at her throughout.

Many who saw the streams were enraged, but others encouraged the men by sending messages on the screen like “I will give you gifts if you kiss her.”

Sometimes the three men shaved Yang’s hair and took away her hat, prompting her to scream. The scenes often attracted multiple responses online, the report said. They would also arrange for Yang to play a “Sea Princess” in a “romantic love” drama created by themselves. 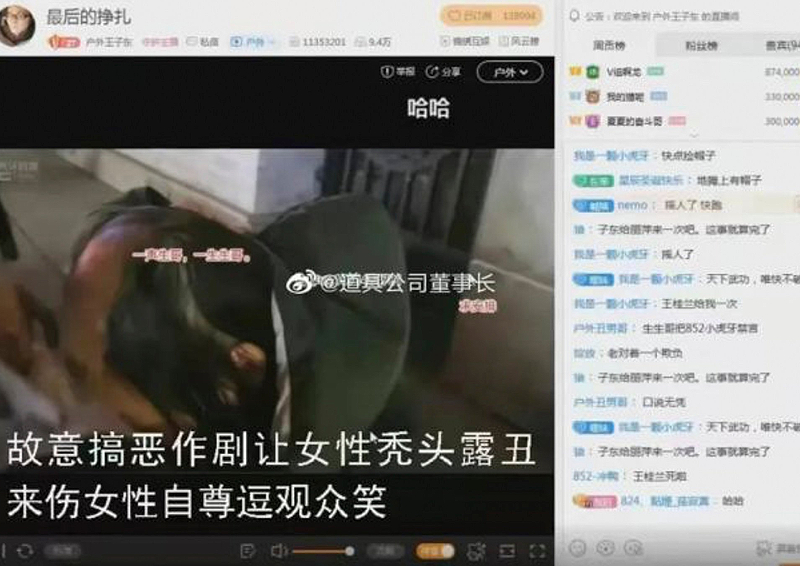 On Dec 9, they let Yang drink five bottles of yogurt in a row despite the fact that they were aware of her diabetic condition. Yang was sent to hospital immediately after being forced to consume the yogurt, the report said.

Police said Yang has transferred to a general ward and is in a stable condition.

While the local police are investigating the case, live-streaming platform Huya announced that the accounts of the men involved had been closed permanently.

“Xiaohui’s plight makes the public feel grieved. Those live-streamers shouldn’t ignore morality and shouldn’t forget the minimum requirement for a human being when focusing on pursuing the traffic,” the state media China National Radio (CNR) commented on Weibo earlier this week.

“But while condemning the live-streamers, we need to reflect; has the platform exercised its monitoring duties? The long-term existence of these live-streams is not only ascribed to the hosts’ poor legal awareness, but also due to the platforms’ tolerance and connivance,” CNR said.