In world's new Covid-19 epicentre, Indonesians help each other as trust in government falters For the past 11 days, Wisnu Sopian has travelled around the scenic streets of Cipanas, in Indonesia ’s West Java province, on his trusted motorcycle. But this is no leisure trip – the 25-year-old university student is delivering food and daily necessities to the houses of self-isolating Covid-19 patients.

Wisnu took the initiative to become an unpaid delivery man in the town after he noticed that his self-isolating friends were struggling to have their needs met due to a number of reasons, whether it was financial hardship or living alone without family or relatives nearby.

“I saw on Twitter that there was some kind of movement elsewhere where citizens help each other. There was no initiative like that in my region, so I thought I had to start it because I think it would take a long time for the local government to step in and help its people,” he told This Week in Asia. 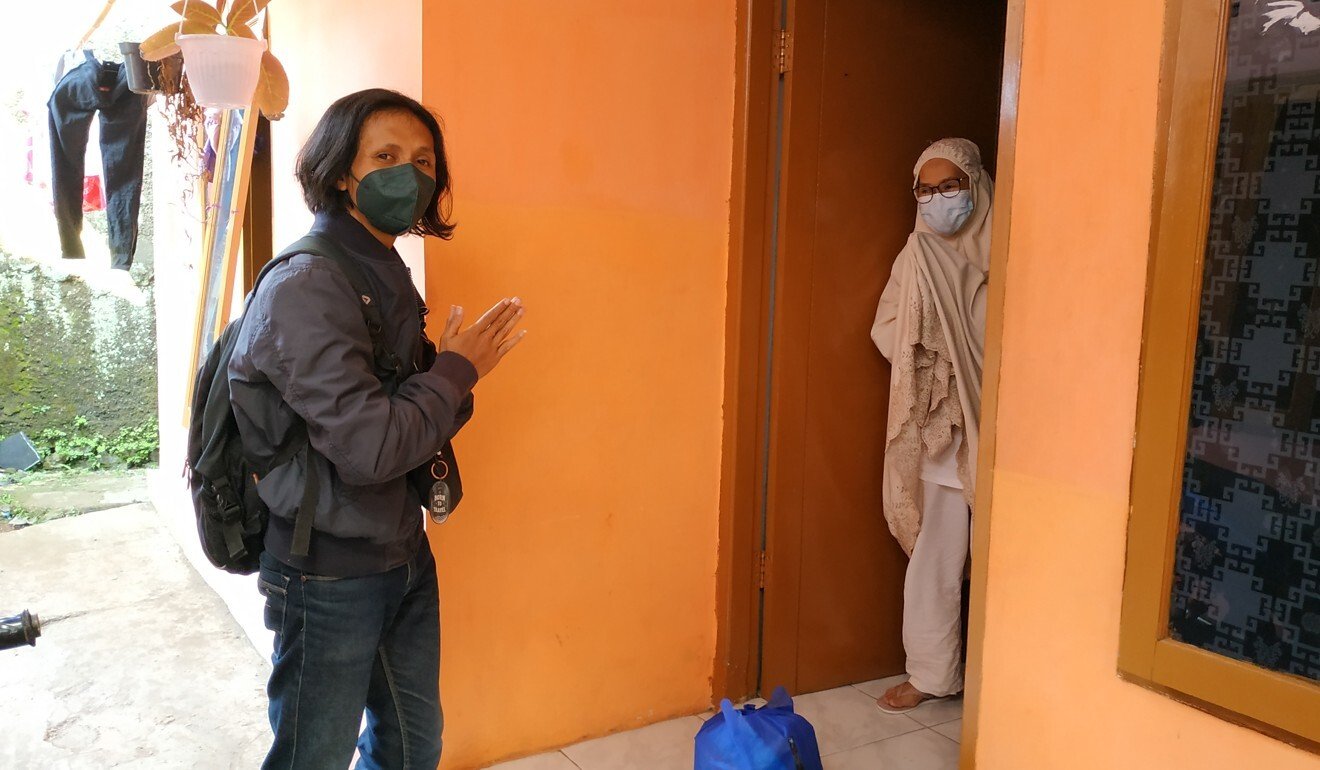 On July 8, Wisnu posted his phone number on Twitter so patients in Cipanas could text him if they needed staple foods, baby milk formula and diapers, or other daily needs. That afternoon, a text came in from a patient living 33km away from his house, so he used his own money to buy foodstuffs and delivered them in person.

After tweeting that he was accepting public donations to help with the deliveries he makes to three or four people every day, Wisnu collected about 9 million rupiah (S$846), and has spent more than half of that amount already. Distance is no obstacle for him – he has driven close to 40km (25 miles) to make a delivery.

“As long as I still have the support of kind donors, I’m planning to do this until the emergency public activity restrictions are lifted,” Wisnu said.

Volunteer-driven initiatives such as his may be needed for the foreseeable future, as Indonesia has become the world’s new pandemic epicentre. The country on Sunday reported 1,093 deaths linked to Covid-19, overtaking Brazil in terms of the world’s highest daily death toll, and on Monday set another unwanted record with 1,318 fatalities, as well as 34,257 new cases of the disease.

'I am really, really overworked'

The crisis has brought the country’s already fragile health care system to its knees, with 218 health workers having died from Covid-19 so far this month, according to volunteer group Lapor Covid-19, which tracks pandemic-related data. A total of 1,439 health workers have died from the virus since the start of the pandemic, according to the group.

Among those providing free telemedicine services is Yogyakarta-based Dr Riyo Pungki Irawan, who has assembled a team of around 30 medical professionals across the country who use messaging apps to cater to the thousands of self-isolating Covid-19 patients.

“In one day, I can receive up to 500 texts on WhatsApp,” the 25 year-old said, adding that the sheer volume of messages had forced him to limit consultations to an hourlong window, 7am to 8am from Monday to Thursday.

“If I don’t limit my telemedicine hours, I could work until late at night, while I still have to go to the hospital in the morning,” Riyo said. “My limit has been crossed, I am really, really overworked.” 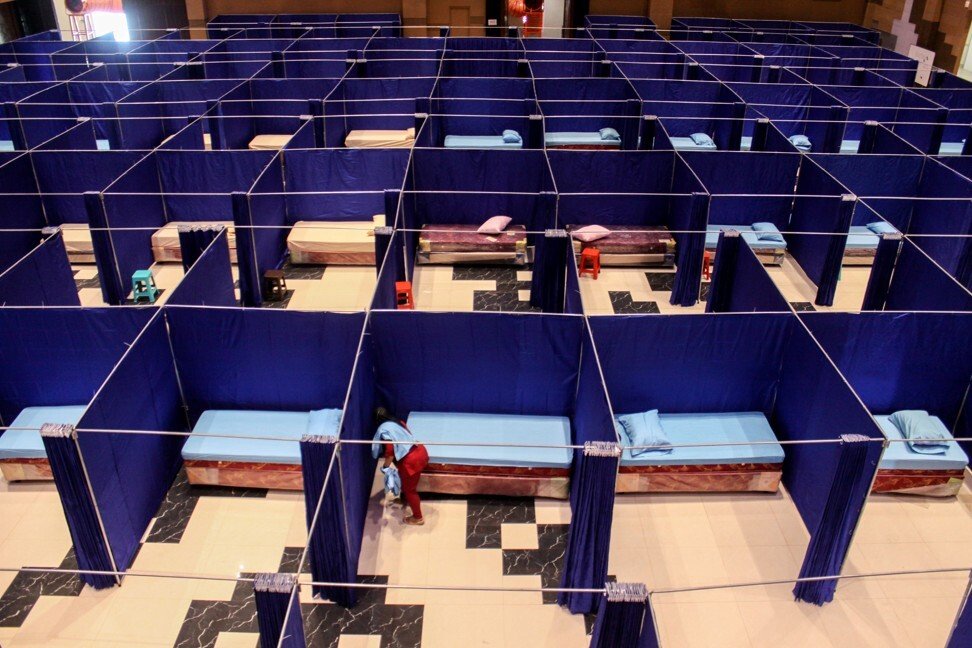 To help with the scarcity of hospital beds, the authorities have turned flats, government buildings, sports stadiums, and hospital car parks in high-risk areas into isolation or treatment rooms. Indonesia has also received ventilators, vaccines, oxygen tanks, testing kits, and other medical equipment from trade partners such as the United States, Australia, India, China, the United Arab Emirates, and Singapore.

But Riyo said the additional hospital beds and medical equipment would not be that helpful if frontline doctors and nurses kept dying from Covid-19 while cases kept increasing.

“It’s easy to procure or import hospital beds and other facilities, but it’s not that easy to replicate doctors,” he said. “This virus multiplies much faster than doctors, nurses, and other health workers.”

Indonesia is set to tighten movement restrictions for Eid ul-Adha – the feast marking the culmination of the annual pilgrimage to Mecca – which this year begins on Tuesday.

Muslims around the world typically observe the holy day by attending prayers at mosques, and then sacrificing livestock such as cows, goats, or camels in ceremonies attended by many people.

But this year, Indonesian Muslims in high-risk areas have been barred from mass Eid celebrations, while animal sacrifices can only be performed in slaughterhouses. The meat will be directly distributed to recipients’ houses to prevent crowding around mosques or other public spaces.

From July 18-25, domestic travel will be limited to essential workers and people with special reasons such as pregnant women and visits to sick relatives. For air travel, passengers must show a negative PCR test, taken at most two days before departure.

But not all regions will heed the central government’s rules. The administration of Gowa regency in South Sulawesi, a high-risk zone, has said Muslims will still be allowed to pray in mosques on Eid ul-Adha.

“Mass gatherings, for any purpose, carry the potential for Covid-19 transmission. The risk becomes higher if the mobility increases, considering the threat of the Delta variant,” said epidemiologist Dicky Budiman from Griffith University in Australia. “Regions outside Java island should not underestimate this threat. If there are no [mobility restrictions], they will face a similar situation to Java, or worse.”

Dicky predicts that the current wave in Java will peak around the end of July or the middle of August, and that the curve will be flattened by the end of September. He said this estimate would remain unchanged even if there was a surge of cases after Eid ul-Adha, though the number of infections and deaths as well as the hospitalisation rate would “significantly increase” at the peak of the wave.

While movement restrictions have been in place on the islands of Java and Bali since July 3, critics say the current curbs are insufficient as people are still flouting the rules – such as a Covid-19-positive passenger on a flight from Jakarta to Ternate last week who used his wife’s negative test result so he could make the trip.

Meanwhile, footage of investment minister Bahlil Lahadalia and trade minister Muhammad Lutfi laughing while walking in proximity without wearing masks during a work trip to the United States has prompted an outcry in Indonesia, as the government officials were deemed insensitive to their home country’s plight.

President Joko Widodo has now barred his ministers, except for the country’s foreign affairs chief, from travelling overseas without his permission, according to cabinet secretary Pramono Anung.

Meanwhile, an opinion poll by The Indonesian Survey Institute of 1,200 respondents – done in late June, before cases spiked drastically – found that trust in Widodo’s ability to handle the pandemic had fallen to 43 per cent, compared with 56.5 per cent in February.

A Monday editorial in the Indonesian-language publication Tempo said officials had denied how grave the situation was, which had affected efforts to control spread of Covid-19.

Widodo’s top lieutenant, Luhut Pandjaitan – who is in charge of the emergency public activity restrictions, or PPKM Darurat – on Saturday conveyed an apology for how the country’s poor had been hit hard by the pandemic.

“I wanted to apologise to all Indonesians, from deep inside my heart, if [the pandemic] handling in Java and Bali has not been optimal,” he said in an online news briefing.