A teenager has been found guilty of killing his grandmother in South Korea, after her body was found with around 60 stab wounds.

However, the court has ruled the killing as 'accidental', causing outrage among members of the public.

The incident occurred on Aug 30 last year at their Daegu home, where the 19-year-old stabbed his grandmother with a kitchen knife at 12.50am.

According to local media, the teenager committed the act because his grandmother was being nitpicky and scolded him and his younger brother.

The elder brother reportedly attempted to kill his grandfather as well but was dissuaded by his sibling.

Last Thursday (Jan 20), the elder brother was found guilty of murder and sentenced to seven to 12 years' imprisonment. He was also ordered to wear a Global Positioning System (GPS) tracker for 10 years.

His younger brother, 17, was handed a two-and-a-half-year prison term for assisting his sibling in murdering their 77-year-old grandmother.

He had closed the windows at home so that their grandma's screams could not be heard from outside.

This case has sparked backlash online, with reactions ranging from anger to disbelief at the lenient sentences meted out. Netizens found it hard to understand how such an act could be deemed as 'accidental'. 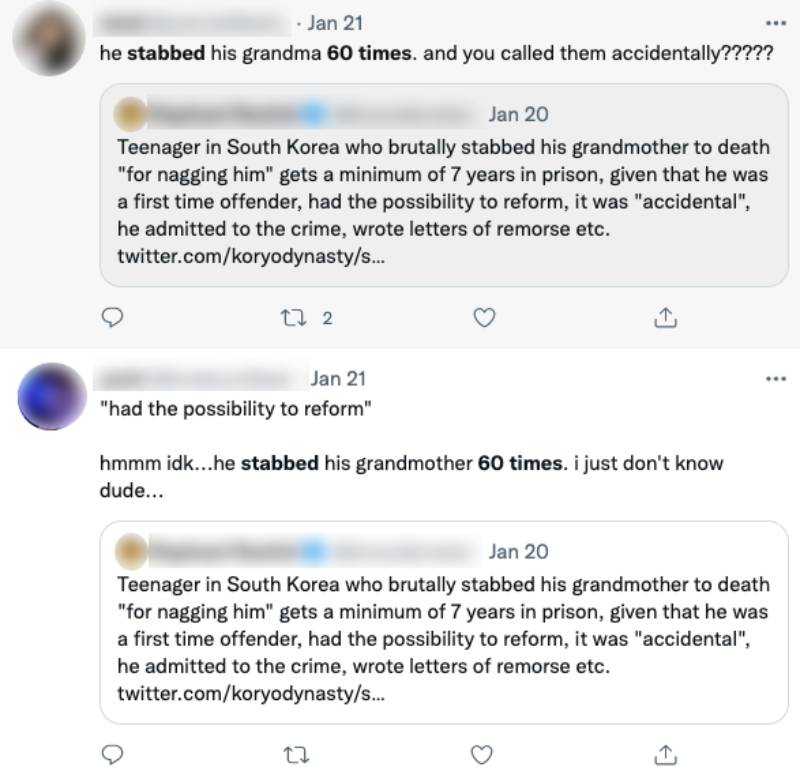 According to a Vice report, South Korea's juvenile justice system focuses on rehabilitation as opposed to punishment, where juvenile offenders are encouraged to participate in correctional treatment programs to reform behaviour.

"He is well aware of his wrongdoing and seems to have sufficient room for reformation,” stated the court on the elder brother during sentencing.

Some netizens were also critical of the judge for giving the brothers a book, titled "Bicycle Thief", reported Vice.

The Korean short story collection includes one story which details a boy who attempts to keep his good conscience among materialistic adults.

According to Yonhap, the brothers experienced poverty at a young age and had been living with their grandparents since 2012 after their parents divorced.

The court pointed out that the brothers' unfortunate childhoods may have affected their behaviour.

A psychological analysis of the elder brother showed he had a tendency for "explosive emotional expressions" and the court took that into consideration in its ruling of the crime as "accidental".