Some say cash is king but the antics of one Philippine mayor with a custom-made gold "money gun" has raised a few eyebrows.

In a viral Facebook video posted on Tuesday (Dec 28), Narvacan mayor Luis "Chavit" Singson could be seen firing 100-peso (S$2.65) and 500-peso bills at his constituents who jostled and screamed in excitement.

The 43-second video — with the caption "Narvacan residents, are you ready?" — has garnered over three million views and almost 7,000 comments.

Singson, 80, said it was not a publicity stunt for an election campaign as he is not seeking to stand in the May 2022 elections, according to the Philippine Daily Inquirer. He added his move was not new as he had done so in the past and not just during the holidays.

"It was meant only to make people happy, especially since it's Christmas. If people are happy, I am, too," Singson said in Tagalog.

Residents of Ilocos Sur said the mayor has always been "generous" since he joined politics in 1972.

Though a large number of people appreciated the generous gesture during Christmas, some found it demeaning and even likened it to the popular Netflix series Squid Game. 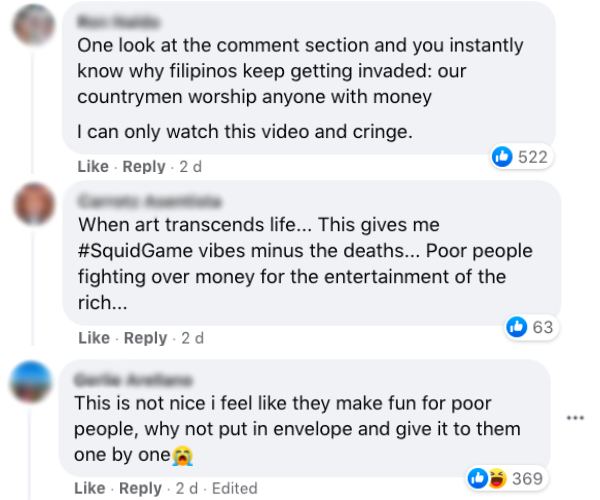 On Dec 17, Philippine government officials said that close to four million people were pushed into poverty in the first half of the year due to pandemic-induced lockdown measures that dried up jobs and reduced domestic demand.