Armed with nothing more than a piece of cardboard to ward off the ferocious heat of a New Delhi summer, Rohingya refugee Hilal Ud-din furiously flaps air at his two young children in an attempt to cool them down.

Their tarpaulin tent has no electricity, water, or even a place to cook, but Hilal fears the worst is still yet to come for his family.

“When it starts to rain, all these tents will be washed away, and we’ll have no place to go,” the 31-year-old said with a look of dismay. “If they don’t allow us to rebuild our shelter, where will we go?”

His concerns are not unfounded. Last weekend, some 57 Rohingya refugee families, including Hilal’s, were left homeless after a fire ripped through their shanty town of bamboo and tin shelters – some of which had been standing since 2012 – in Madanpur Khadar, on the outskirts of the Indian capital. 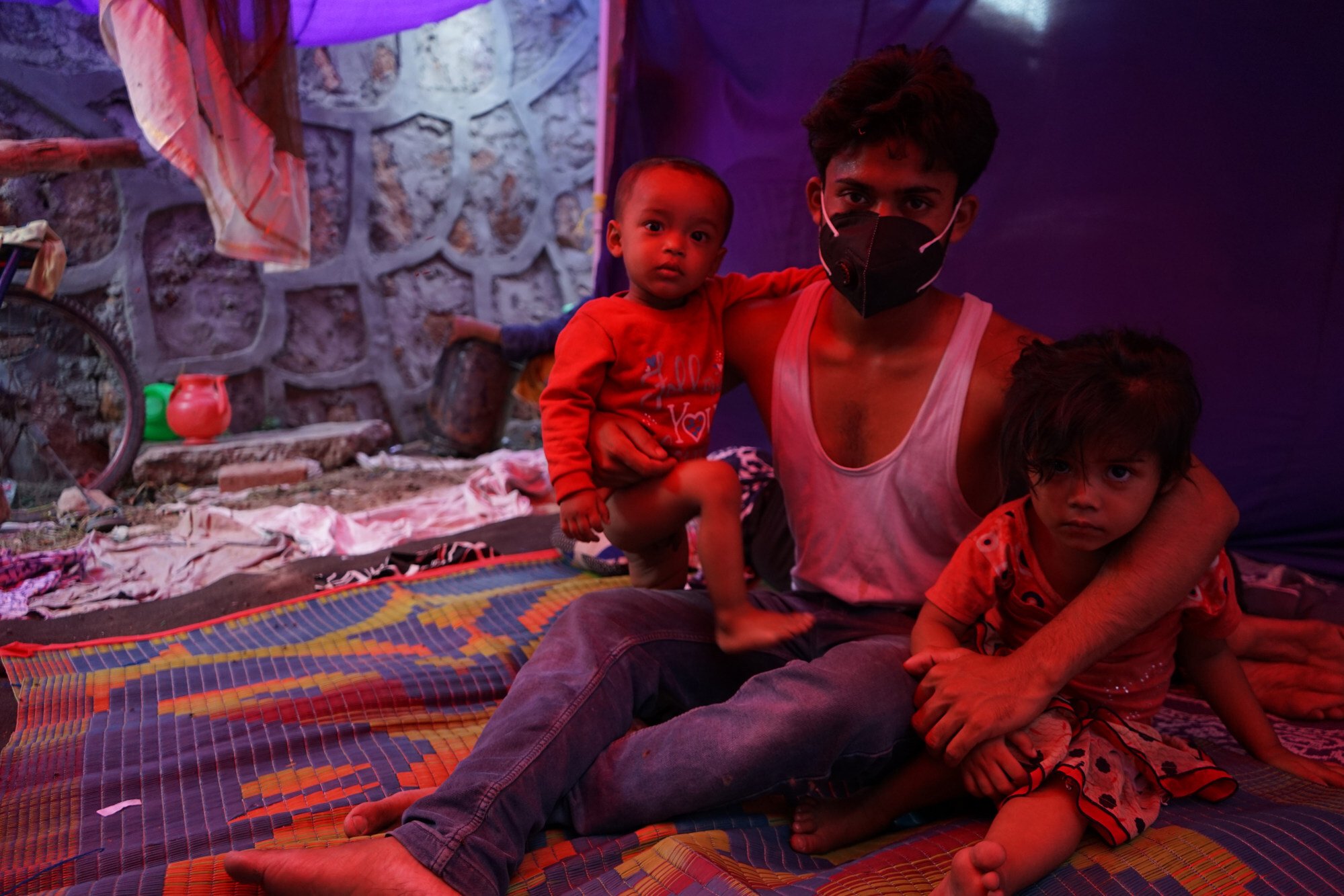 No one was injured in the blaze, but the makeshift settlement, which included a mosque and school, was devastated. To make matters worse, officials from the Uttar Pradesh government put a stop to their attempts to rebuild.

“When the local NGOs came to help us to rebuild the shelters. the government officials present refused to allow us to reconstruct,” Hilal said. “They said we can’t resettle here. An official even told us that it is better if we leave this place altogether.”

Pravir Singh, a subdivisional magistrate for the area, said aid had been provided to the affected families, but insisted “the land belongs to [the Uttar Pradesh] irrigation department and can’t be used for building shanties”.

Rohingya refugees who fled persecution and violence in their homeland of Myanmar have repeatedly been referred to as illegal infiltrators and threatened with deportation by Prime Minister Narendra Modi ’s Bharatiya Janata Party, which came to power in 2014.

More than 180 Rohingya refugees living in Jammu, Indian-administered Kashmir , were put in detention in March. The city’s chamber of commerce and industry had earlier threatened to launch an “identify and kill movement” if the government did not take action against illegal settlers.

Back in Delhi, the 57 Rohingya families living in Madanpur Khadar have been moved on before, when a fire that started in the dead of night destroyed their shelters on a nearby plot of land in 2018. They were not allowed to rebuild then, either.

“Every time we are forced to move, it creates fear in our hearts,” said Anwar Shah, a community leader of the camp. “We don’t have the money to pay rent for an apartment. We will have to continue to live in shelters. We request the government give us a place to live. If not here, we are ready to resettle at some other location. But we shouldn’t have to face threats to vacate later.”

There are an estimated 40,000 Rohingya refugees living in India . Most have been issued cards by the United Nations ’ refugee agency, UNHCR, identifying them as asylum seekers – a move aimed at protecting them from arbitrary arrests.

Shah, 33, has impaired vision and works as a labourer to feed his family of six. He came to India in 2012 after spending a year in a refugee camp in Bangladesh hoping for a better life for his family – but said this has not turned out to be the case.

“We have received so many threats to leave over the years that I can’t even recall all of them. They would scare us by saying, ‘we’ll build a barricade around the plot if you don’t leave’. So we always had this fear that something will happen,” Shah said. 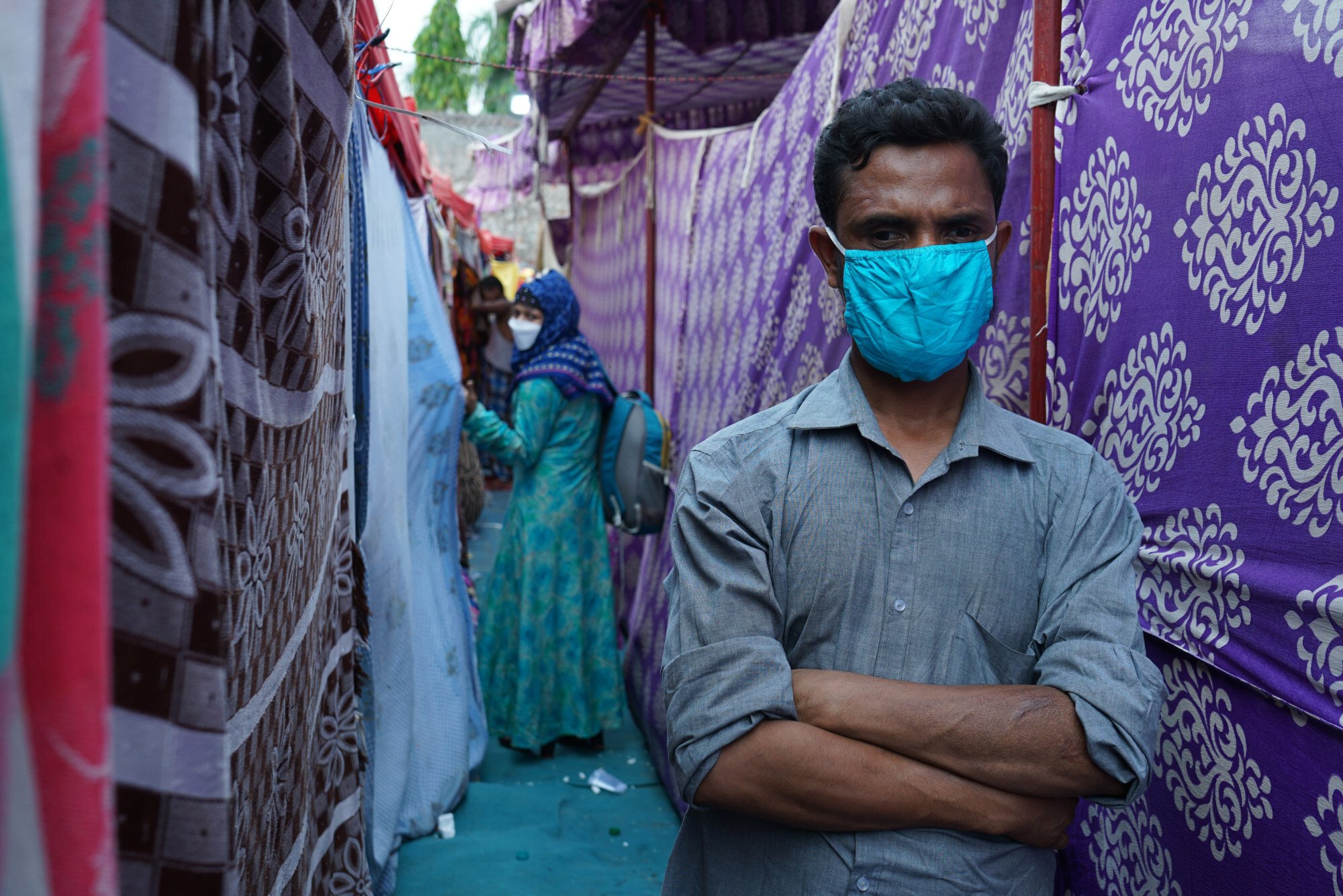 India is not party to international agreements on refugees such as the UN’s 1951 Refugee Convention or its 1967 Protocol and does not have a national refugee protection framework in place.

Instead, it relies on its foreign relations with refugees’ countries of origin to make a decision on how they might be treated.

This has led to Rohingya refugees often facing threats of deportation under the Foreigners Act 1946, which gives the government unbridled power to deport any foreign citizen lacking proper documentation.

The controversial Citizenship Amendment Act passed in 2019, which on the face of it was meant to ease a path to citizenship for refugees in India, excluded all Muslims.

This has left the Rohingya, who predominately follow Islam, unable to apply for citizenship and vulnerable to threats and hate campaigns.

The coronavirus pandemic has only made things worse. Hilal used to work at a banquet hall until he was let go during India’s first virus lockdown last year. He said no one in their camp has been vaccinated against Covid-19, despite them having had cases.

“We don’t have any Indian documents to register for the vaccination,” he said. “I hope there aren’t any serious cases here. We have no resources or will to fight that.”

Refugees and Asylum seekersindiaRohingyahuman rights
Share this article
This website is best viewed using the latest versions of web browsers.