In 2021 there were a raft of reports about the Myanmar military regime’s mass killings, and the massacre in Hpruso, Kayah state, on Christmas Eve ranks as one of the deadliest attacks of the year.

Anti-junta fighters, rights activists and officials from international aid agencies who spoke to This Week in Asia said that while news of large civilian casualties no longer jolted them after months of fighting, the nature of the latest killings had horrified them.

On Christmas Day, the Myanmar Now news portal reported that the remains of at least 35 charred bodies had been found in three burnt-out vehicles.

This week, a doctor who conducted autopsies on the bodies told a press conference that the condition of the remains showed the victims were killed “in the cruellest and most inhumane manner I have seen in my life”.

Among the victims were women, children and two employees of the charity Save the Children. The doctor said several of the bodies had their hands tied behind their backs, were gagged, and had holes in their lungs and chests.

The group of doctors who conducted the postmortem examinations were able to carry out autopsies on only 31 bodies as other remains had been completely destroyed by the fire and crumbled to ashes when touched.

The Tatmadaw, as the Myanmar military is known locally, said after the incident that people were “killed in the crossfire”, adding that “gunmen” fired back at soldiers when the convoy of vehicles was asked to stop for checks.

Interviewees suggested that without stepped-up international action including an arms embargo endorsed by the United Nations, such killings were likely to intensify in the coming months.

Since junta chief Min Aung Hlaing seized power and detained leaders of the democratically elected National League for Democracy last February, more than 1,400 people have been killed by security forces, according to local monitoring group the Assistance Association for Political Prisoners.

A senior official from an international aid agency directly involved in Myanmar operations lamented what he referred to as an “out of sight, out of mind” policy on the latest killings by world powers including the US and China , and suggested that national governments’ public condemnations of the violence was “out of step from their positions on what is a civil war in all but name”.

A Yangon-based aid worker said it was incomprehensible that Cambodia’s prime minister Hun Sen – the current chairman of the Asean bloc, which Myanmar belongs to – was visiting the country this week. He is the first head of government to do so since the coup.

The visit has drawn severe criticism given that it departs from an earlier consensus within the bloc to sideline Min Aung Hlaing over his failure to adhere to the Association of Southeast Asian Nations’ “five-point consensus ” peace plan.

“Min Aung Hlaing is being rewarded with a semblance of legitimacy [through Hun Sen’s visit] just days after one of the Tatmadaw’s worst atrocities since the coup. It’s simply inexplicable,” said the person, who spoke on condition of anonymity. 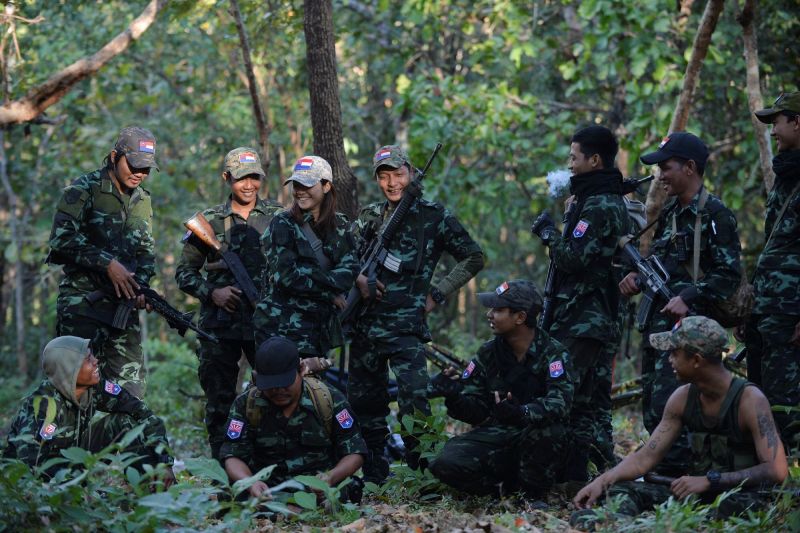 While the UN Security Council took the rare, unified step of calling for “accountability for this act”, there has been little other action from the international community to take the Tatmadaw to task.

“Broad condemnations from the UN will just go in one ear of the Tatmadaw and out the other unless it is backed by real concrete action by the Security Council, starting with moving forward for a global arms embargo against Myanmar,” said Phil Robertson, the deputy director of Human Rights Watch’s Asia division.

“The unconscionable silence from regional powers like China, India, Australia, Japan and South Korea in the face of such appalling atrocities gives a green light to the Myanmar military to do it again.”

“So far, the coalition of governments taking action against Myanmar is significant, but still too narrow. So there needs to be a sustained effort to get these fence sitters off the fence and acting to support respect for human rights, accountability for rights crimes, and restoration of democracy in Myanmar,” he added.

The Kayah state killings were just one instance of the military atrocities that took place in December alone.

On Dec 9, images circulated on social media showed charred corpses in Done Taw village in the northeastern Sagaing region, which has emerged as the epicentre of fighting between Min Aung Hlaing’s forces and the so-called People’s Defence Forces (PDFs) who are loyal to the shadow National Unity Government (NUG). As in the Hpruso killings, some of the victims in the Done Taw massacre had their hands tied behind their backs.

Members of various PDFs, which sprang up across the country in the aftermath of the coup in February last year, say the killings have intensified since November, as the Tatmadaw began rolling out a scorched earth military offensive dubbed “Alaung Min Taya”.

The assault follows the NUG’s declaration of a “defensive war” against the military and has involved the use of air strikes and helicopter assault operations, the PDF sources said. One member of a PDF said local defence forces – while skilled in covert rural fighting – “were not ready” for the full-on assault from the military.

Still, the forces have survived in part by seizing weaponry including AK-47 rifles from Tatmadaw soldiers, the person said. PDF sources also cited concerns about facing off with the Tatmadaw’s Light Infantry Divisions – a centrally commanded counter-insurgency force seen as the tip of the military’s spear.

The 33rd and 99th Light Infantry Divisions gained notoriety in 2017 for atrocities that forced 700,000 Rohingya Muslims to flee Myanmar. Their modus operandi of “clearance operations” – involving burning civilians’ homes in places where resistance fighters are nearby – has been used in the current conflict.

In a recent commentary, veteran Asian military analyst Anthony Davis said that while the media had in recent months described the state of the conflict as a “stalemate”, the real trajectory of the fighting was unclear “given the wide geography of the Myanmar heartland and a stark lack of independent reporting”.

Nonetheless, an overstretched boots-on-the-ground fighting force of “significantly fewer than” 100,000 soldiers and weakening morale were vulnerabilities for the Tatmadaw in 2022, Davis said in a commentary for the Asia Times.

“Anecdotal evidence suggests that at the end of 2021 army morale might best be described as ‘uncertain’ – somewhere between ‘brittle’ at the negative end of the spectrum and ‘robust’ at the positive end,” Davis wrote.

He added that the regime was likely to intensify its offensive in the country’s dry season that usually lasts until May. “Army commanders can be expected to throw the full weight of their forces against PDFs with a focus on Sagaing where the armed revolt is most advanced,” he said.

“Failure to contain it risks exacerbating vulnerabilities that later in 2022 could yet tip a precarious strategic balance sharply against the Tatmadaw with consequences that are difficult to predict.”