The wife of South Korean presidential hopeful Yoon Seok-youl has sparked outrage for saying that #MeToo scandals occur because the women involved were not "paid" by men.

Kim Keon-hee, 49, made the remarks to a reporter from Voice of Seoul, a YouTube news channel with liberal leanings that is supportive of the ruling Democratic Party. Yoon is a member of the opposition People Power Party.

Copies of the audio recording - part of 52 phone conversations that Kim had with a Voice of Seoul reporter between July and December last year - were released to MBC TV, one of South Korea's three major free-to-air broadcasters, which aired the conversation late on Sunday (Jan 16).

This came about after a court allowed the recording to be played on-air, albeit with parts redacted, after dismissing a request from the People Power Party to stop it from hitting the airwaves.

"MeToo incidents occur because they [men] don't pay, surely. They wanna play around but have no money. I understand them," Kim said.

She was referring to how the prominent politicians from the ruling liberal Democratic Party had been mired in a series of sex scandals in recent years. 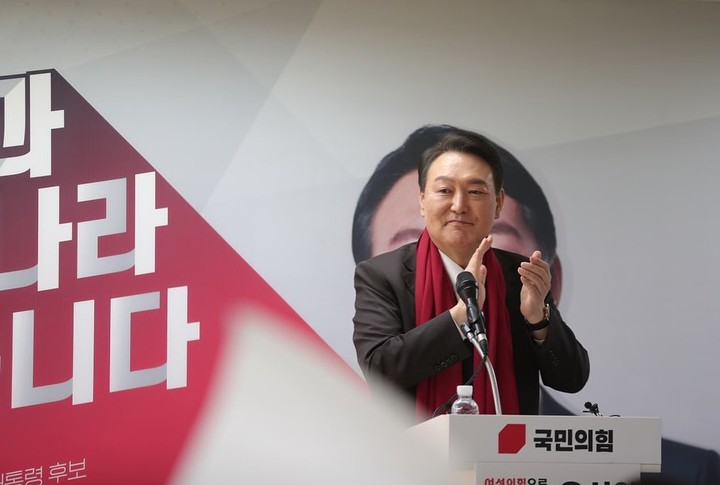 Among them were the former governor of South Chungcheong province Ahn Hee-jung, who was sentenced to 42 months in prison in 2019 for sexually assaulting his aide; former mayor of Seoul Park Won-soon, who committed suicide in 2020 after his secretary filed a police report alleging four years of sexual harassment; and former Busan city mayor Oh Keo-don, who resigned in 2020 amid similar allegations.

Kim was heard saying that unlike liberal politicians "conservatives make sure they pay".

"They don't use people free of charge," she said, adding that she felt sorry for ex-governor Ahn and that she and Yoon were on "Ahn Hee-jung's side".

"Conservatives should pay to do it," she added, going on to say that conservatives should not follow in the footsteps of liberals in failing to pay the women involved, as they never knew when incidents would come back to haunt them.

Social media users criticised her remarks, saying she was bringing fresh pain for #MeToo survivors and was supportive of sexual attackers.

Kim Ji-eun, the woman victimised by Ahn Hee-jung, called for a sincere apology from Kim Keon-hee, accusing her of making a total "mockery" of the #MeToo movement in South Korea.

Kim Keon-hee, who sent in a written response to MBC's request for comment, apologised to the public for "inappropriate remarks" she made "in the process of criticising certain liberal figures involved in sexual exploitation".

During the phone conversations with the journalist, Kim also denied allegations that she was mingling with fortune-tellers and consulting them for Yoon's political future.

The Segye Ilbo daily on Monday reported a renowned fortune-teller was serving as a key adviser at Yoon's electioneering headquarters, a claim immediately denied by the election camp as groundless.

Kim's remarks are likely to deal a blow to Yoon whose support rate plunged amid a series of controversial missteps before regaining lost ground this month against Lee Jae-myung, the Democratic Party candidate. Yoon is currently leading Lee by 40.6 per cent to 36.7 per cent, a survey by Realmeter found on Monday.

Kim publicly apologised in December for embellishing previous job applications to make her sound more qualified than she actually was.

But her remarks also reveal how gender-based conflict, on the rise in South Korea, has coloured the presidential election that will take place in March.

Young Korean males have become increasingly vocal with their frustrations at rising home prices and the lack of good jobs, believing that they are losing out to women who can continue with their studies uninterrupted while men have to serve obligatory conscription of up to 21 months.

Men have protested against gender quotas in the workplace instituted to improve South Korea's record on women's rights and launched cyberbullying campaigns against women, including one last July that targeted 20-year-old Olympic archer An San, who has short hair, for "looking like a feminist".

This has come about after a rise in young women speaking up on issues such as the gender pay gap and organising mass protests against spy-camera scandals in 2018 amid a global #MeToo movement.

The opposition has latched on to the wave of antifeminism in its bid to win youth votes, with Yoon calling for the abolition of the Ministry of Gender Equality and Family, which implements policies for gender equality at workplaces, expanding women's participation in society and preventing domestic and sexual violence and protecting its victims.

Lee Jung-ah, of the Gyeonggi Women's Associations United, said it was apparent that some politicians were seeking to tap public anger and "channel it into the ballot boxes".

"But I wonder whether this tactic would work as they seem to forget the fact that half of the population in this country are women," she added.