Larger than life: Will billboards help decide Indonesia's next president? When Indonesia was ravaged by a second wave of Covid-19 earlier this year, you would have expected the bulk of scrutiny to be on the Delta variant and its rapid spread across the country.

However, public attention was divided between the collapsing health system and the proliferation of billboards and banners across the country that highlighted political elites.

One of those on public display is Puan Maharani, the current speaker of parliament and heir apparent to the Sukarno political clan.

The 48-year-old is the daughter of former president Megawati Sukarnoputri, the leader of the Indonesian Democratic Party of Struggle (PDI-P), who is generally seen as President Joko Widodo’s political matriarch.

Puan’s ubiquitous billboards, erected by the PDI-P, the family’s political vehicle, boast slogans such as “Indonesia is great!” or “The flapping wings of diversity”.

She is part of a group of scions of Indonesian political dynasties who are likely to vie for victory in the 2024 presidential election, which is set to be a wide open race as Widodo is constitutionally barred from seeking a third term.

However, their paths to the top job will not be smooth, analysts say, as they may go up against regional leaders who have proven themselves during the pandemic when they were given more responsibility and autonomy to curb the spread of Covid-19.

“Within the PDI-P there is a desire from Megawati to [nominate] Puan in the presidential election in 2024, that’s why Puan was promoted heavily through billboards,” said Siti Zuhro, senior political researcher at the Indonesian Institute of Sciences (LIPI).

Puan’s first stint in elected office came in 2009, when she won the race to be member of parliament for District 5 in Central Java. Five years later, she was a potential candidate for vice-president on the PDI-P ticket, next to Widodo, but the party agreed on veteran politician Jusuf Kalla as his running mate. The pair won the 2014 election with over 53 per cent of total votes.

Widodo then installed Puan as coordinating minister for human development and cultural affairs, a new bureau installed in his first-term cabinet. Puan won again in the 2019 legislative elections, representing the same district, and was later appointed as speaker of parliament.

“Puan saw an opportunity for a greater sphere of influence being a member of parliament. Her victory during the 2019 legislative election means that her rise now cannot be contained,” said Siti from LIPI, adding that Megawati would be upset if anyone got in the way of Puan’s rise.

Siti said Megawati would be adamant about nominating Puan in the 2024 presidential election as she had lost the opportunity to do so in 2014 and 2019 due to Widodo’s nominations. “Although Puan’s electability in the public opinion polling is now low, the party’s political machine will work when the elections near,” she said.

Another figure tipped as a potential presidential candidate is Ganjar Pranowo, the governor of Central Java who also belongs to the PDI-P. Ganjar has consistently ranked atop public opinion polls in recent months, alongside other regional leaders such as Anies Baswedan and Ridwan Kamil, the governors of Jakarta and West Java, respectively.

Ganjar came first in a July poll by Charta Politika, with the support of 23 per cent of respondents, ahead of Anies and current defence minister Prabowo Subianto, a two-time presidential candidate.

Among PDI-P supporters, 45 per cent said they supported Ganjar, while only 5 per cent backed Puan. An Indikator Politik survey had Prabowo ahead of Ganjar, respectively preferred by 28 per cent and 21 per cent of respondents, while Puan was backed by just 1.1 per cent.

“It will be more realistic if Megawati focuses her efforts on placing Puan as her replacement [as chairman] in PDI-P, since the great names of Soekarno and Megawati are the party’s main unifying factors.

''To win legislative and presidential elections, the party, whether they like it or not, must look at the figure with the highest electability,” said Yunarto Wijaya, executive director at Charta Politika.

Analysts said Ganjar’s rising popularity during the pandemic had irked Megawati, who had barred party personnel from discussing the 2024 election and demanded a focus on handling the pandemic.

In May, Puan attended a cultural event hosted by a PDI-P branch in Central Java, to which Ganjar had not been invited. In a Thursday virtual address attended by the party’s cadres, including Ganjar, Megawati issued a reminder of the sanctions they would face if they were “disloyal”, according to online news portal Detik.

“Ganjar’s climb [in the polls] occurred within weeks of a high-profile slight inflicted upon him by Maharani,” wrote Kevin O’Rourke, a long-time Indonesia watcher and analyst, in his newsletter Reformasi in August, in a reference to the cultural event. “She and her mother, PDI-P chair Megawati, are attempting to sideline Ganjar, but the poll suggests that the efforts are ineffective, or may even be backfiring by generating sympathy for him.”

There are also questions about whether Widodo will toe the party line or defy it by backing Ganjar. The president’s son Gibran Rakabuming, the mayor of Solo, in August changed his Instagram profile picture to a photograph of himself alongside Ganjar. In the photo, he had also altered his hair to be as white as Ganjar’s as a gag, sparking rumours that the Central Java governor was Gibran’s presidential candidate of choice.

“Whether the outgoing president will make an explicit endorsement prior to the election is questionable, especially if the nominee of his party differs from the figure he prefers. But the president may signal his stance with adequate clarity and yet refrain from vocalising it explicitly,” O’Rourke wrote in his newsletter. 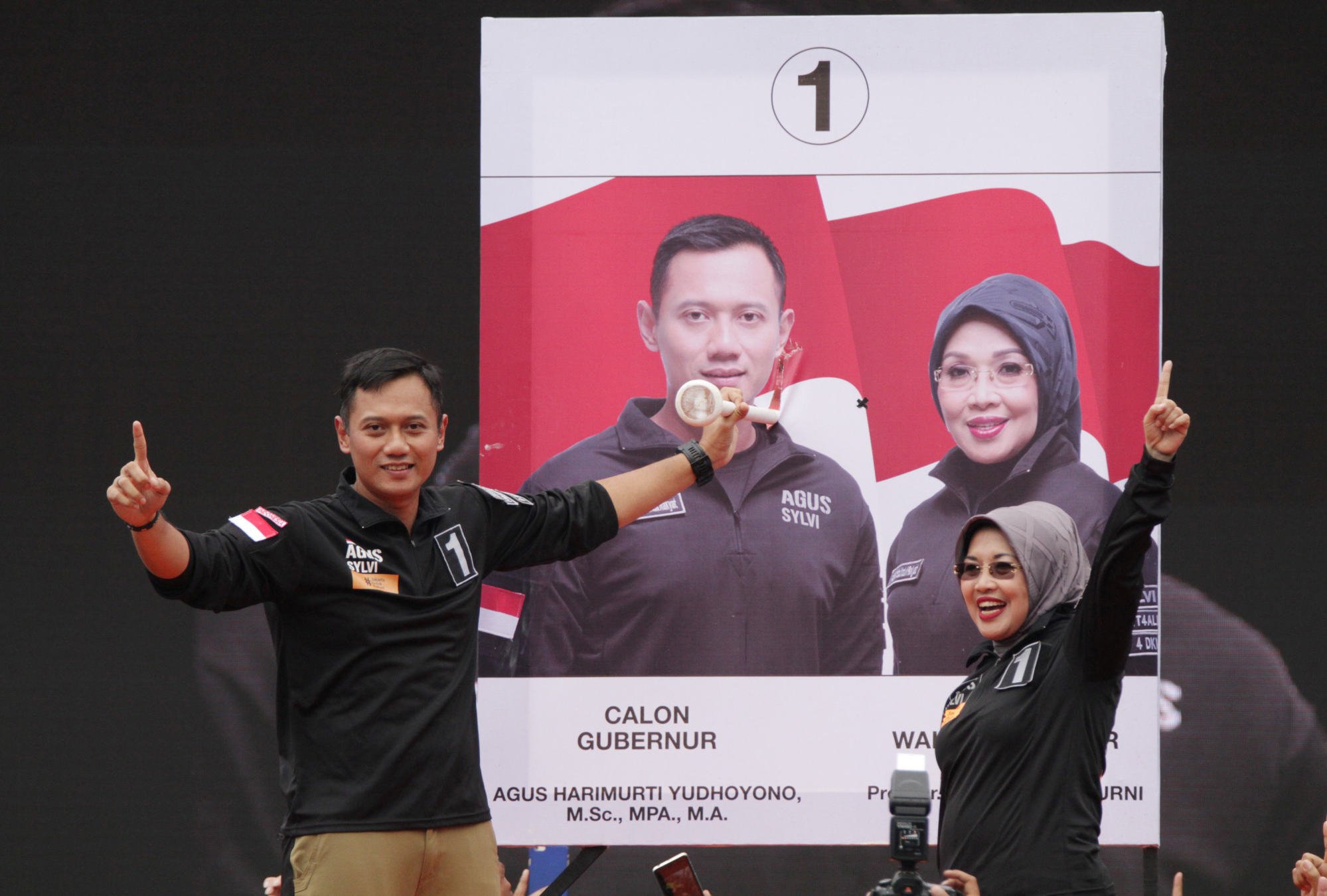 Besides Puan, another political scion tipped to run for president in 2024 – with the billboards to match – is Agus Harimurti Yudhoyono, chair of the Democratic Party and son of former president Susilo Bambang Yudhoyono.

Recent polling places him behind other potential contenders; he was only backed by 3.9 per cent of respondents in the Charta Politika survey. Unlike Puan, however, Agus has never won an election for public office. He lost in the 2017 Jakarta gubernatorial election to Anies and running mate Sandiaga Uno, now the tourism minister.

Analysts say that billboards alone will not be enough to swing the election for political elites, as voters generally prefer a meritocracy as well as a platform of reform rather than just heirs to a dynasty. They say this preference has been consistent since Widodo was first elected president in 2014, when he was seen as an outsider and a man of the people.

“In 2019, the Democratic Party also plastered billboards featuring Agus all over Jakarta, but he failed in the election. I remember my taxi driver commented, ‘Why were the billboards of this inexperienced man all over the city?’” said Alexander Arifianto, research fellow with the Indonesia programme of the S. Rajaratnam School of International Studies (RSIS) at Singapore’s Nanyang Technological University.

“The billboards are not an effective way to garner support from the public; what I fear is that they might backfire. All the candidates featured on these billboards are mostly from the establishment, not one of them is popular in the grass roots.”

However, Puan’s billboards have increased her profile online, according to Ismail Fahmi, founder of social media tracker Drone Emprit. Between July 7 and Aug 7, Puan garnered 12 per cent of the share of discussions on online news portals and Twitter, when previously there had been no online chatter mentioning her name. However, she still trailed behind regional leaders such as Ganjar, Anies, and Ridwan.

Not all the chatter was positive, as her billboards have also been mocked and turned into memes – though some Indonesians feel this may have been the point of the campaign.

“Puan and those who make and enjoy PDI-P memes, including me, have been tricked by their marketing strategy,” posted Twitter user @gazettier. “Puan’s billboards were intentionally funny as they wanted people to turn them into memes, so their campaign can target millennials and Gen Z.”