Diana Fitriani was only 17 when she left her sleepy hometown of Purwokerto on Indonesia 's most populous island of Java to further her studies in Yogyakarta, a bustling city about four hours away by car.

Boasting a number of internationally renowned tourist destinations such as Prambanan Temple — the largest Hindu temple of ancient Java — Yogyakarta is also home to universities and Indonesian language schools that attract thousands of international students every year.

Borobudur, the world's largest Buddhist temple, built in the seventh century, is about an hour's drive away in the nearby town of Magelang.

Now 27 and working in marketing, Diana recalled feeling "stunned" at the sight of foreign tourists when she went to Prambanan Temple with a group of university friends. This led to some "tacky" behaviour, she said.

"That was not the first time I saw foreigners, but I was still stunned because I rarely see people with physical characteristics like them … Maybe because I was with a group of friends at that time, and we were in Prambanan [Temple], I asked [the foreigners] to take pictures together with us," she said, adding that she used her "limited English" to make the request, but did not end up keeping the photos.

For foreign tourists in Indonesia, especially those who have lighter skin, being asked to pose for photos is a relatively common occurrence —  a result of a continued belief across parts of Asia that having fair skin is a symbol of higher status.

This is starting to change, however, as more people speak up against racial prejudice, with cosmetics companies also forced to pull back from what has been a lucrative billion-dollar skin lightening industry. 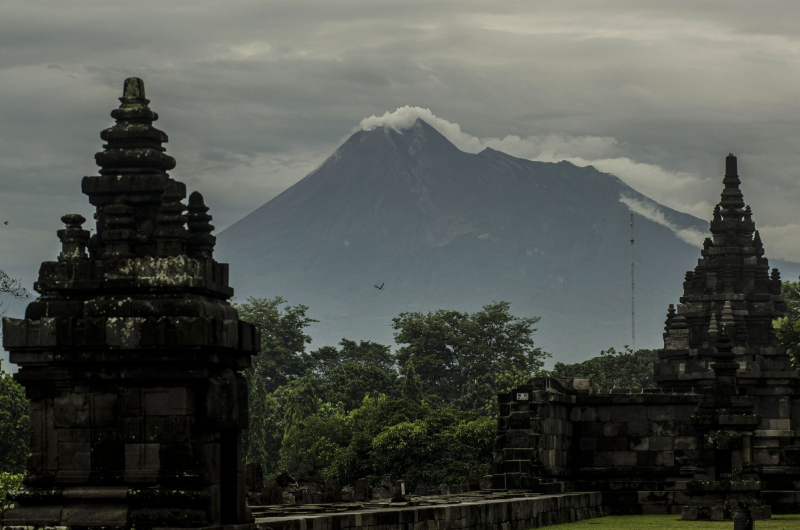 Still, before the pandemic when millions visited Borobudur every year, it was common to see children wielding selfie sticks and approaching foreign tourists, shouting "Mister! Mister!" to ask for a picture.

President Joko Widodo , also known as Jokowi, was referring to this mindset when he brought up the problem of "inlander mentality" last week during a speech to mark the 10th anniversary of The National Democratic Party, part of Jokowi's political coalition.

Despite 76 years of independence, many Indonesians have yet to shake off the mentality of a formerly colonised people who view lighter-skinned Westerners as superior, Widodo said.

More than three centuries of Dutch colonisation has resulted in an internalised attitude of ethnic inferiority and low self-esteem, which manifests itself when Indonesians come into contact with foreigners, he said — adding that now was the time for the nation to rid itself of this mentality.

"I do not want inferior mentality, inlander mentality, this colonial mentality still entrenched into the mentality of our nation. [We act like] meeting a bule (white-skinned foreigner) is like meeting anyone important. This makes us sad."

"Sometimes we overly look up [to foreigners], when we all eat the same kind of rice. I am also aware that we were colonised for 350 years. Sometimes I think whether we had been colonised for far too long that this [inlander mentality] is entrenched in our DNA. Maybe this is [the situation now], even though we have been independent for 76 years."

He later concluded the speech by urging all Indonesians to be more optimistic, confident, and "abandon the inlander mentality" once and for all.

According to historian Agus Setiawan from the University of Indonesia, the word "inlander" dates back to the founding of Batavia — as Jakarta was then known — by Dutch colonisers in 1619. At that time, the Dutch travelled inland in the region and met the natives, which they later called 'inlander'.

"During their interaction, the Dutch saw these inlanders as backward, hillbillies, from their European point of view, so that the word inlander would be used as a slur during colonial times," Agus said.

The Dutch colonial government, meanwhile, imposed a strict social hierarchy that placed themselves and other Europeans at the top, followed by people from other parts of Asia and the Middle East, while native Indonesians, or pribumi, were at the bottom.

"The inlander, which was the poor people living in the slum areas in the city, or the kampung, was placed at the very bottom," he said.

Even after declaring independence in 1945, Indonesia's founding father and first leader Sukarno repeatedly warned that the "inlander" mentality would be an impediment to the nation's advancement, and act as a modern form of colonisation.

In a typically fiery speech in 1957, titled A Year of Decision, he urged the nation to "move on" from its inlander mentality.

"Are Indonesians destined by God to be an inlander nation, a divided nation, a nation that can't lift themselves up to a higher level? I believe not!" he said, adding that nation building would require a so-called mental revolution — something that has seemingly not yet materialised, as Widodo also used the phrase during his first presidential campaign 57 years later.

Devie Rahmawati, a sociologist at the University of Indonesia, said that Indonesians' desire to have fair skin and other physical traits associated with white foreigners reflected an inferiority complex.

"Those desires did not just come out of nowhere. It's one of the forms of inferiority complex. This postcolonial virus is [implanted] in the society's subconsciousness, so people think it is normal for wanting to be white, they are not aware that it is dangerous."

Most Indonesians have an anecdote or two about being discriminated against by a white person or in a way that favoured one. One Twitter user last year pointed out "racism in [Indonesia's food and beverage industry] is abundant".

"Many Indonesians have become professors and researchers overseas, but our colonial mentality has led us to believe that foreigners are better than usUjang Komarudin," political analyst.

"If locals want to eat [in a restaurant], sometimes they are denied entry due to lack of 'proper attire'. But if a white person, wearing ordinary attire, only wants to buy a beer, the staff would smile [at them] until their cheek widens," Twitter user @hellosnzh said in a popular tweet.

Wulan Pusparini replied that she had once been turned away from an upmarket rooftop bar in central Jakarta for not wearing an evening dress, but "later saw photos posted on Facebook by my former white colleague, who was [allowed entry] even though they were wearing jeans and T-shirt". Another Twitter user later concluded that such discrimination was an example of "inlander mentality".

Political analyst Ujang Komarudin said that this mentality led to rampant corruption among government officials — echoing sentiments conveyed by Sukarno in his 1957 speech, where he laid out materialism, corruption, tardiness, uncleanliness, obsessions for luxury imports and plagiarism, as among the traits of an "inlander nation".

In the education sector, Ujang said that Jakarta's decision to allow foreign rectors at local universities was another example of the inferiority complex in action.

"Local campuses are seen as unable to produce a rector. Do they think that, among 270 million Indonesians, no one is decent enough to be a rector?" he said.

"We have many [Indonesian] achievers who have become professors and researchers overseas, but our colonial mentality has led us to believe that foreigners are extraordinary and better than us."

Devie said that other former colonies in Asia, such as the Philippines, share Indonesia's inferiority complex — but suggested they could shake it off by following the example of South Korea, "which has put the West, and even the world, under its spell through its own popular culture".

"Asians, including Indonesians, can identify more with South Koreans [than Westerners]. They can learn that they also have the chance to spread their culture on the global stage," Devie said.

Back in Yogyakarta, Diana said she now thinks of her past adulation of bule as "an embarrassment". Her attitude changed in 2016, she said, when she visited an exhibition that featured photographs of foreigners at tourist sites.

"I have now realised that there is no reason for us to be stunned seeing foreigners in a tourist spot, let alone asking for a photo together," she said. "There is nothing special about them. They are just like us."