In gold-obsessed India, edible gold leaf-plated burgers have become all the rage after a Mumbai restaurant launched the offerings in July.

Louis Burger’s two creations triggered such an “overwhelming demand”, it plans to open new branches to sell them across the country.

Few countries are as crazy about the yellow metal than India. As the second-largest buyer of gold after China, Indians purchased 315.9 tons of gold-use jewellery in 2020 despite a raging pandemic. Jewellers expect that sales volumes will surge amid a decline in gold prices, according to a Bloomberg report.

India has also long used gold in food, including gold flakes, gold powder, or beaten 24-carat gold known as varq in Hindi. The custom goes back to the Mughal period in the 17th century, when chefs served dishes embellished with gold or silver varq to impress their masters and guests at state banquets.

The practice continues and gold is used prolifically to adorn everything from drinks like sherbets and thandai, to desserts like jalebi, phirni and barfi. Biryanis, rich meat curries and paneer dishes are also given a glistening makeover.

During the festive season, especially around the biggest Hindu festival of Diwali, shops overflow with gift hampers containing silver varq-coated fruits and nuts to be exchanged as gifts.

According to Delhi-based jeweller Ram Deen, gold leaves, flakes and varq are prepared by hammering and hand pounding gold metal sheets for days until it reaches a thickness of 8,000th of a millimetre. Only 22- to 24-karat gold is used for human consumption.

“However, the manufacturing process has to be carried out in hygienic conditions or else contaminants can pose the risk of food-borne diseases,” Deen said. “A similar risk is posed when poor quality of silver or aluminium is used to make varq, which is cheaper but sold as the real deal.” 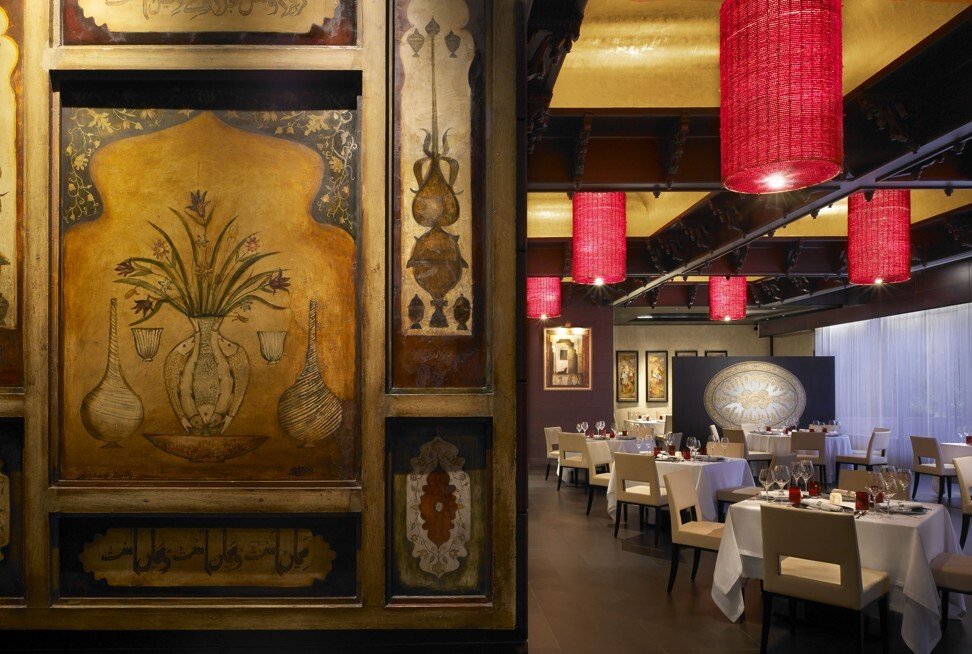 Even though edible gold leaf is the world’s most expensive food item at US$15,000 (S$20,000) per 500 grams, many connoisseurs are willing to pay top dollar for varq-adorned dishes at fine-dining restaurants.

At the five-star Taj Mahal Hotel in Delhi, the Varq restaurant is a popular haunt for the who’s who in India, including top politicians and Bollywood stars.

With its gold-leaf coffered ceiling, bespoke furniture, rosewood wall panelling and an auburn tile floor, the restaurant has a grand menu to match, with dishes such as duck confit and Varqui crab coated with gold varq. The average price for a dish is 1,000 rupees (US$13).

“Gold and silver leaf have been a part of India’s rich cultural and culinary heritage for centuries,” said Pradipt Sinha, the director of food and beverage at the Crowne Plaza Hotel in New Delhi. “They have played a significant role in both Mughlai and Awadhi cuisines characterised by their rich, meat-based dishes.”

Some ayurvedic practitioners claim that eating gold has health benefits.

“In Ayurveda, the addition of gold dust in medicines and health tonics boosts health and improves cognitive skills, when consumed in combination with specific herbs and spices,” said Pandit Yajur Dev, a fourth generation ayurvedic doctor in Delhi whose ancestors worked for Mughal emperors.

Dev said his forebears had passed down tales of kings and their generals consuming varq-anointed herbs and tonics in the days before going out for wars.

But modern doctors and nutritionists say there is no evidence that edible gold improves health.

“Pure edible gold does not break down and dissolve in the bloodstream, so technically there are no health benefits. It is ejected from the human body as a waste product,” said Delhi-based nutritionist Swati Prakash.

He noted edible gold or silver was not harmful to the human body “as the metal is in inert form, not ionic bioactive form, and the quantities involved are minuscule”.

The trend of using gold leaf has caught on in other places. In 2016, New York’s Manila Social Club launched a U$100 24-karat gold-covered donut doused in Cristal champagne icing. Crafted from an ube base – a sweet purple yam widely used in Filipino desserts – and filled with an ube mousse and champagne jelly, it was garnished with gold dust and gold flakes.

In 2017, Tokyo department store Shinjuku Isetan introduced a gold leaf-wrapped sushi priced at about US$97.

Meanwhile, even as the buzz for varq takes India by storm, some foodies aren’t impressed.

“I tried the Louis Burger just to check out what the fuss was all about,” said Mumbai-based software engineer Prateek Mehra. “But the gold leaf did nothing for the burger’s taste. Its flavour was just like that of hundreds of other good burgers I’ve eaten at a fraction of the price.”