“Move over Mukesh Ambani, China’s Zhong Shanshan is now the richest Asian with a net worth of US$77.8 billion (S$103 billion),” tweeted an Indian business daily.

“Zhong Shanshan dethrones Ambani as Asia’s richest,” went another. Meanwhile a cheeky Indian tweeter rued that Ambani, who had kept India’s flag flying high with his wealth, was “now eating humble pie in front of our arch-rival – China!” even as another entreated Prime Minister Narendra Modi to “sell the entire country” to Ambani just so he could “take his spot back” as it was “a matter of national shame”.

News that India’s wealthiest man – Ambani, chairman of the US$200 billion conglomerate Reliance Industries – had been pipped by the Chinese billionaire as Asia’s richest person on the coveted Bloomberg Billionaires Index, has created a flutter in the South Asian country of 1.3 billion.

Many took personal affront that the new winner was from China, a country India has been locked in a deadly confrontation with over their disputed Himalayan border.

“Had it been a Singaporean or Vietnamese or an industrialist from any other Asian nation, we would have been OK. But China?! It is currently enemy number one on the national list,” says Delhi-based tech entrepreneur Shashank Mehta, who switched off his television the moment he heard the news.

Zhong, 66, who helms the bottled water company Nongfu Spring and the vaccine maker Beijing Wantai Biological Pharmacy Enterprise, rose to numero uno on the billionaire’s list as his wealth surged US$70.9 billion this year to US$77.8 billion. This made him the 11th richest person on the planet, one of the fastest rises up the wealth ladder in history.

Ambani, 63, who had previously held fourth spot on the index, has now tumbled to 12th, his net worth having plunged from nearly US$90 billion earlier this year to US$76.9 billion after the value of his shares was roiled by an adverse business climate in a tumultuous year.

Be that as it may, the camera-shy tycoon had notable successes. Focusing on e-commerce, Ambani’s company Jio Platforms, a subsidiary of Reliance Industries, attracted marquee investors like Facebook, Intel and Google.

The astute industrialist, who is known to project his mega projects as ones that benefit the entire nation, commented: “I firmly believe that in the next two decades India will grow to be among the top three economies in the world … More wealth creation means more employment and more business and the tools the two platforms will offer will drive India to a US$5 trillion economy.” 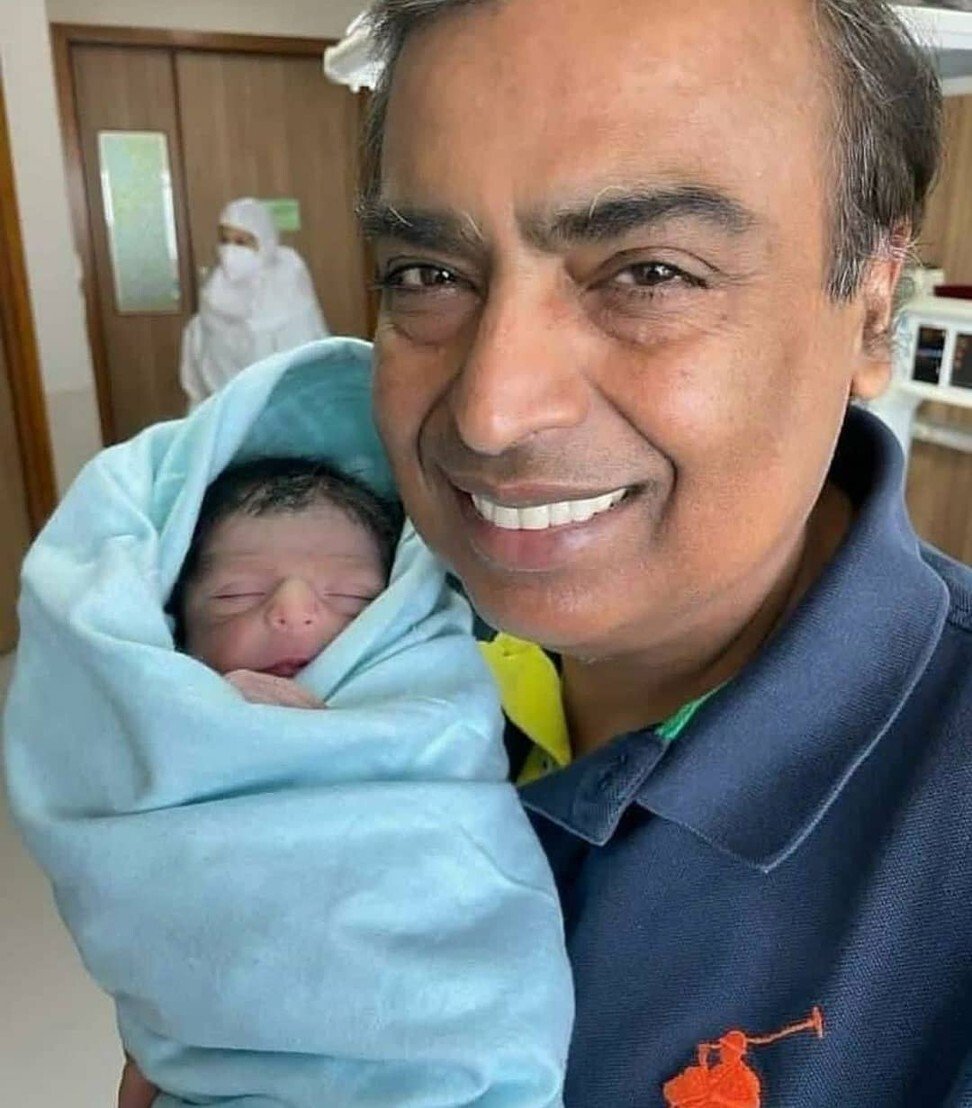 Jio has already steamrollered the competition to emerge as India’s largest digital enterprise. Ambani hopes it will become the country’s riposte to China’s Alibaba , a desi tech titan in one of the world’s fastest-growing internet markets.

Last year was marked by personal highs for Ambani, a father of three, who became a grandfather for the first time. His daughter-in-law, Shloka Ambani, and wife to eldest son Akash, gave birth to a boy last December.

The family lives together in a 27 storey opulent skyscraper, named Antilia after a mythical Greek island.

Located at one of the world’s most expensive addresses – Altamount Road in India’s financial capital of Mumbai – the US$2 billion building is believed to be the second most expensive private residence after Buckingham Palace in London. 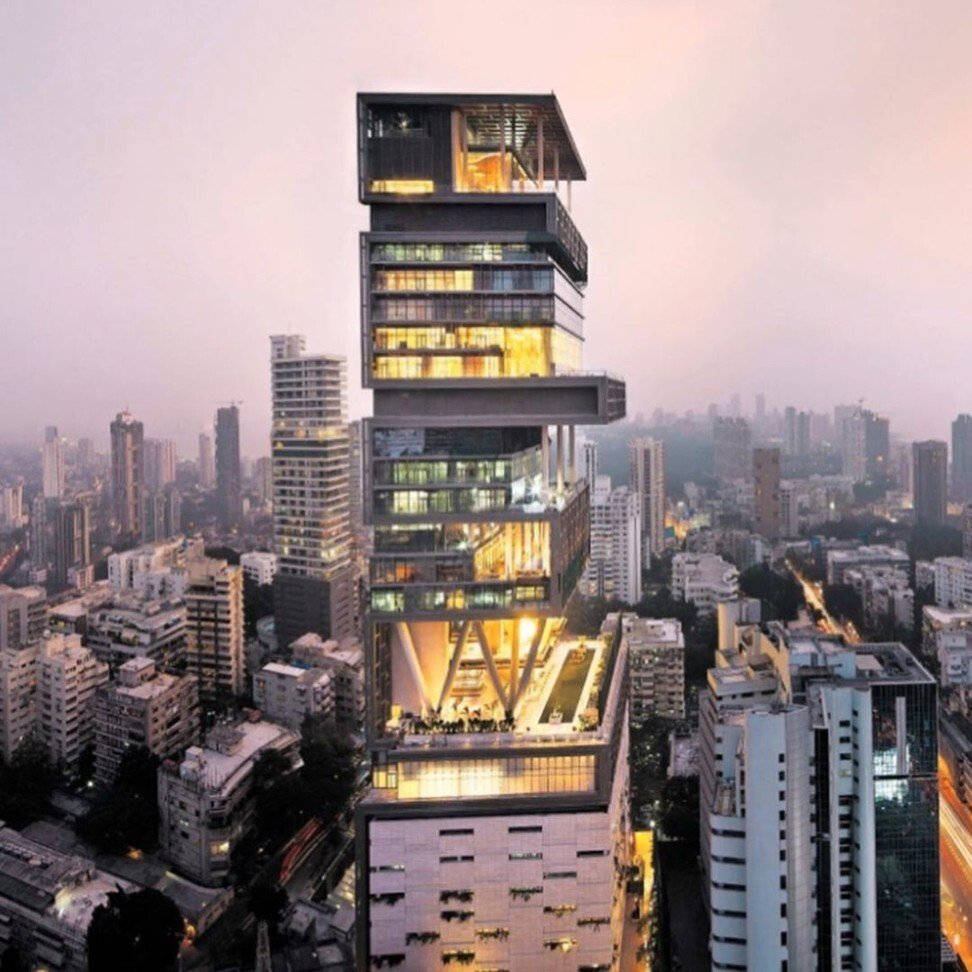 Those who know Ambani claim he is a man of simple tastes, eschews meat and alcohol and isn’t brand conscious in his sartorial choices.

As the head of Reliance Industries, his take home pay is US$2 million a year, a modest sum, say peers, given the gargantuan size of his business empire and the fact that he drew the same salary a decade ago.

The tycoon’s life story has not been without dramatic crests and troughs either. Born to middle class parents, he commuted by public transport while studying to be a chemical engineer.

He had to drop out of Stanford University – where he was pursuing an MBA degree during the 1980s – to help his father build his flagship company, Reliance, later transforming the unglamorous energy juggernaut into a modern conglomerate with a global footprint.

There have been some controversies along the way, including allegations of the family having to buy government loyalty. In 2017, the Securities and Exchange Board of India fined Reliance Industries in connection with a market manipulation case.

Critics have also accused the Ambanis of leveraging their influence in a Supreme Court case over a gas exploration deal, a charge Reliance denies.

In recent days, Reliance has had to grapple with attacks against its telecommunications masts by farmers accusing the conglomerate of profiting from farm reforms. On Monday, the company, which also operates India’s largest retailer, asked the government to help stop the attacks, Reuters reported.