Taiwan has drawn up a plan to provide humanitarian support, including a basic living allowance, to Hongkongers seeking asylum on the island out of fear they will be prosecuted at home for their alleged involvement in the anti-government protests.

The Taiwan-Hong Kong Service and Exchange Office would be set up under the Taiwan-Hong Kong Economic and Cultural Cooperation Council - a semi-official organisation established in 2010, Chen Ming-tong, the head of the Mainland Affairs Council, which handles the self-ruled island's relations with Beijing, said on Thursday.

"It will provide humanitarian assistance and care for Hongkongers on a case-by-case basis in line with the existing law," he said.

The new office would be funded by the central government, and work with human rights and civil groups to help shelter seekers with residency, settlement, employment and protection issues, Chen said, adding that anyone fleeing Hong Kong for political reasons would be entitled to the basic living allowance.

He said the office would open on July 1, but did not say how many people from Hong Kong were seeking shelter on the island.

The move by Taipei was not a rescue plan, but simply a show of support for the people of Hong Kong, he said.

Taiwan's President Tsai Ing-wen issued a directive on May 27 saying a plan would be created to support Hongkongers, soon after China's top legislature approved a proposal to introduce a national security law in the city.

The National People's Congress - China's rubber-stamp parliament - voted last month in favour of a resolution to initiate the legal process for the legislation that would outlaw acts and activities of secession, subversion, terrorism and foreign interference in Hong Kong.

The United States, European Union and other nations expressed criticism and concern at the news, saying the legislation would erode human rights and the city's freedom and autonomy from Beijing.

In the absence of a political asylum law - Taiwan has tended to refer to people seeking to flee Hong Kong as "shelter seekers" - Tsai, of the independence-leaning Democratic Progressive Party, said her government could use Article 18 of the Laws and Regulations Regarding Hong Kong and Macau Affairs to deal with the situation.

It states that, "necessary assistance shall be provided to Hong Kong or Macau residents whose safety and liberty are immediately threatened for political reasons". 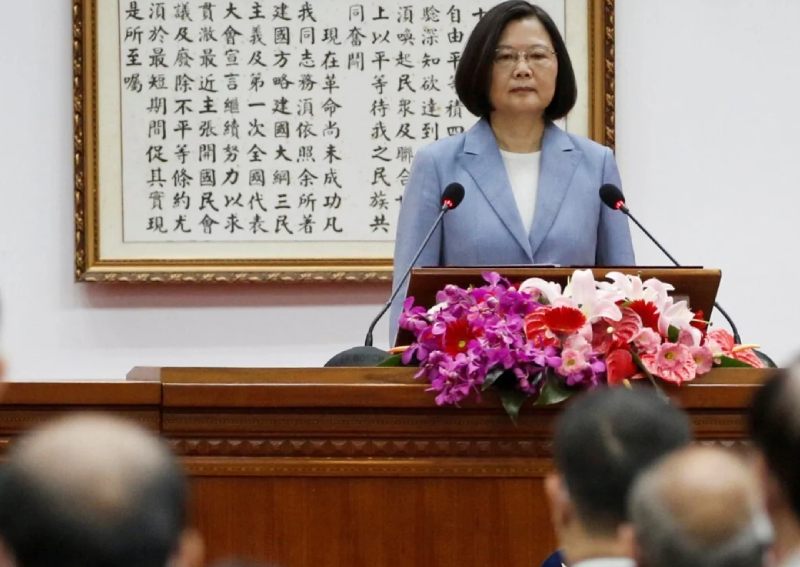 Chen said that Hongkongers who met the conditions of Article 18 could apply to the office for help, but any support, including the living allowance, would be provided only after they had entered Taiwan.

As to how much money people might receive, Chen said each case would be considered separately and the support provided would be in line with their needs.

The Taiwan-Hong Kong Service and Exchange Office, which is located in Taipei, would also offer assistance to Hongkongers looking to settle in Taiwan by investing in the island and those with special talents, Chen said.

"We also look forward to the government working closely with NGOs on the humanitarian assistance project," it said, adding that it hoped the new office would also provide a communication and response channel for those in need as the situation in Hong Kong was becoming more complicated by the day.

A woman surnamed Chan who runs a small business in Hong Kong said she was considering relocating to Taiwan after being detained for 48 hours last year for taking part in a protest in the city, though she had yet to be charged.

"I began thinking and researching about moving to Taiwan after the major clash at Polytechnic University in November," the 24-year-old said.

"I have many friends emigrating to Taiwan but not knowing where to get help," she said, adding that the creation of the new support office in Taipei was an improvement on the current situation.

A man named Tom who works in the aviation industry said he and his wife had been thinking about moving to Taiwan after they retired.

"I've always loved Taiwan, its culture and environment," the 38-year-old said. "The political turmoil in Hong Kong has hastened my decision to leave, as I can see our freedoms are being eroded."

Ma Ngok, a professor of political science at Chinese University in Hong Kong, said it was clear from the announcement that there were still some issues to be resolved.

"Taiwan probably wants to sort out its definitions of 'Hongkonger' and 'refugee' before putting anything in black and white, so it has more wriggle room," he said.

Hong Kong-based political commentator Johnny Lau Yui-siu said he was not surprised that the Mainland Affairs Council had not given away much information about the scheme.

"Such announcements must be vague," he said. "There's no reason for Taiwan to give away lots of details just so Beijing can make a fuss about it."