Nabi*, an Afghan refugee in Indonesia , has spent the past month demonstrating outside the United Nations High Commissioner for Refugees (UNHCR) building in the city of Pekanbaru with other refugees, seeking clarity about their resettlement status. When no answer was forthcoming, on Dec 3 Nabi and three other refugees took needles and thread and sewed their lips shut.

“Absolutely it hurt,” he said. “It was so painful. But staying in Indonesia every day with no news is even more painful.”

Nabi, who is Hazara, a minority group persecuted in Afghanistan , left in 2013 to escape the brutal Taliban regime and has been waiting to be permanently resettled ever since. He said he was considering setting himself on fire as the next step.

“If UNHCR doesn’t want to help us then that is the best option. Instead of dying a little every day, it is better to die once,” he said.

The demonstration in Pekanbaru was part of a series of wider protests by Afghan refugees in cities across Indonesia in recent weeks, in a sign of increasing despair among the 13,000 or so refugees from places such as Afghanistan, Somalia and Myanmar, some of whom have been in limbo in Indonesia for over a decade.

In recent weeks there have been demonstrations in Pekanbaru, Makassar and Jakarta, with refugees taking to the streets with banners to demand resettlement in a third country and erecting temporary camps and sit-ins outside UNHCR offices.

At the end of Nov 22-year-old Afghan refugee, Ahmad Shah, set himself on fire in the city of Medan in North Sumatra to protest against his lack of resettlement status, having travelled to Indonesia in 2016.

A security guard put out the flames with a fire extinguisher, but Shah had already suffered third degree burns. 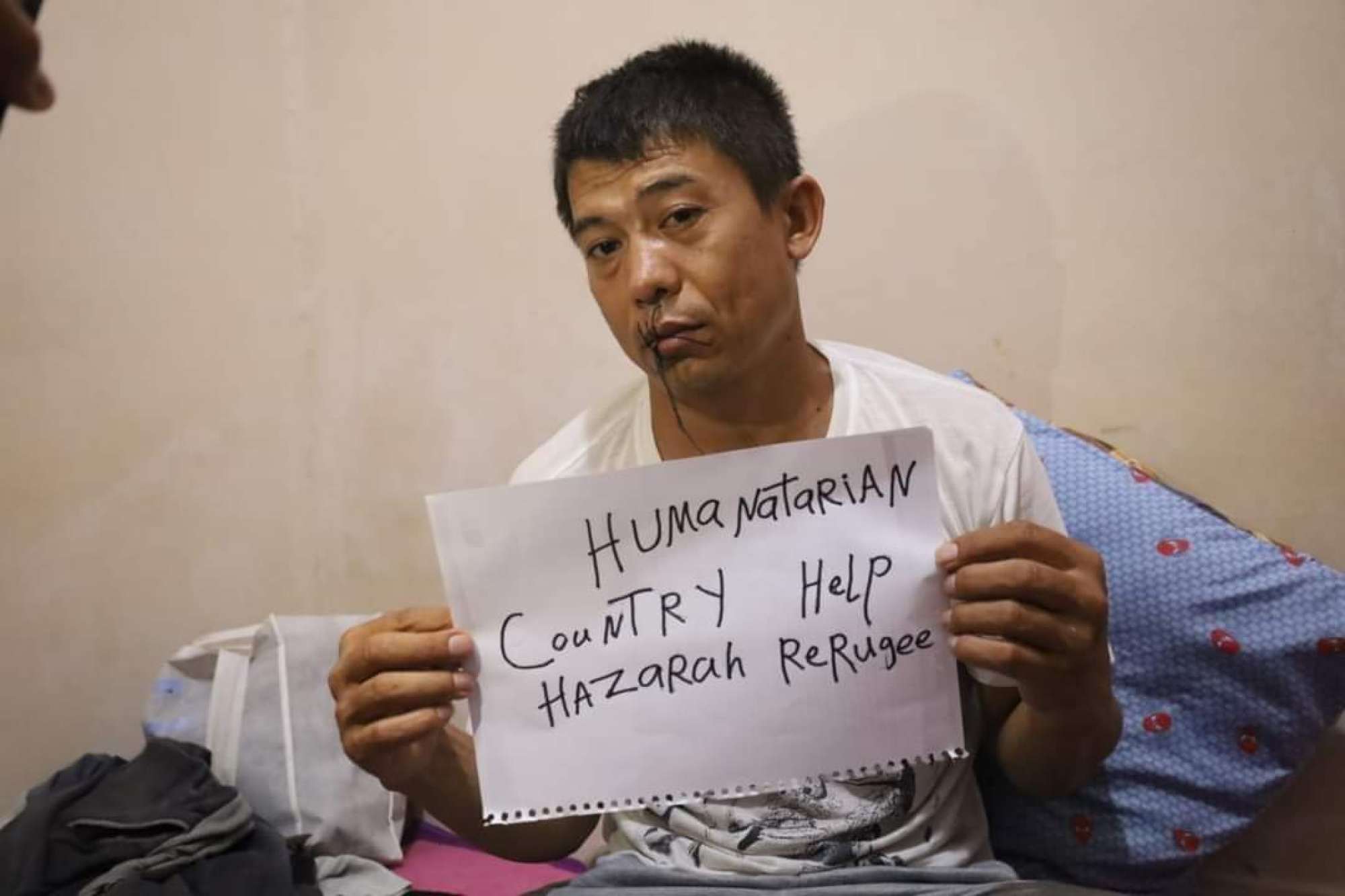 As Indonesia is not a signatory of the 1951 Refugee Convention or the subsequent 1967 Protocol, permanent resettlement is prohibited, although refugees may stay in the country until they are approved to move to a third country such as the United States or Canada.

While in Indonesia, refugees are not allowed to work, drive a car or motorbike, go to university or leave the city limits.

Adult refugees receive 1,250,000 rupiah (S$119) from the International Organisation for Migration (IOM) which has to cover all their expenses except their accommodation – an amount that many refugees say is impossible to live on.

“We are not eating enough food. We cannot live the way IOM think we are living,” said Nabi, who added that he often had to ask other refugees to share their food with him.

“Many refugees only eat instant noodles once a day. If it continues like this, there could be a refugee genocide in Indonesia,” said 25-year-old Ali Froghi, who is a based in Makassar, Sulawesi.

According to Ali, refugees have to resort to draconian measures to afford even the most basic of items. One went on a strict diet for several months, eating only tomatoes so that he could save up enough money to buy a bicycle. Other immigrants, whose families are still in Afghanistan and Pakistan also have to be frugal so that they can send some money home. 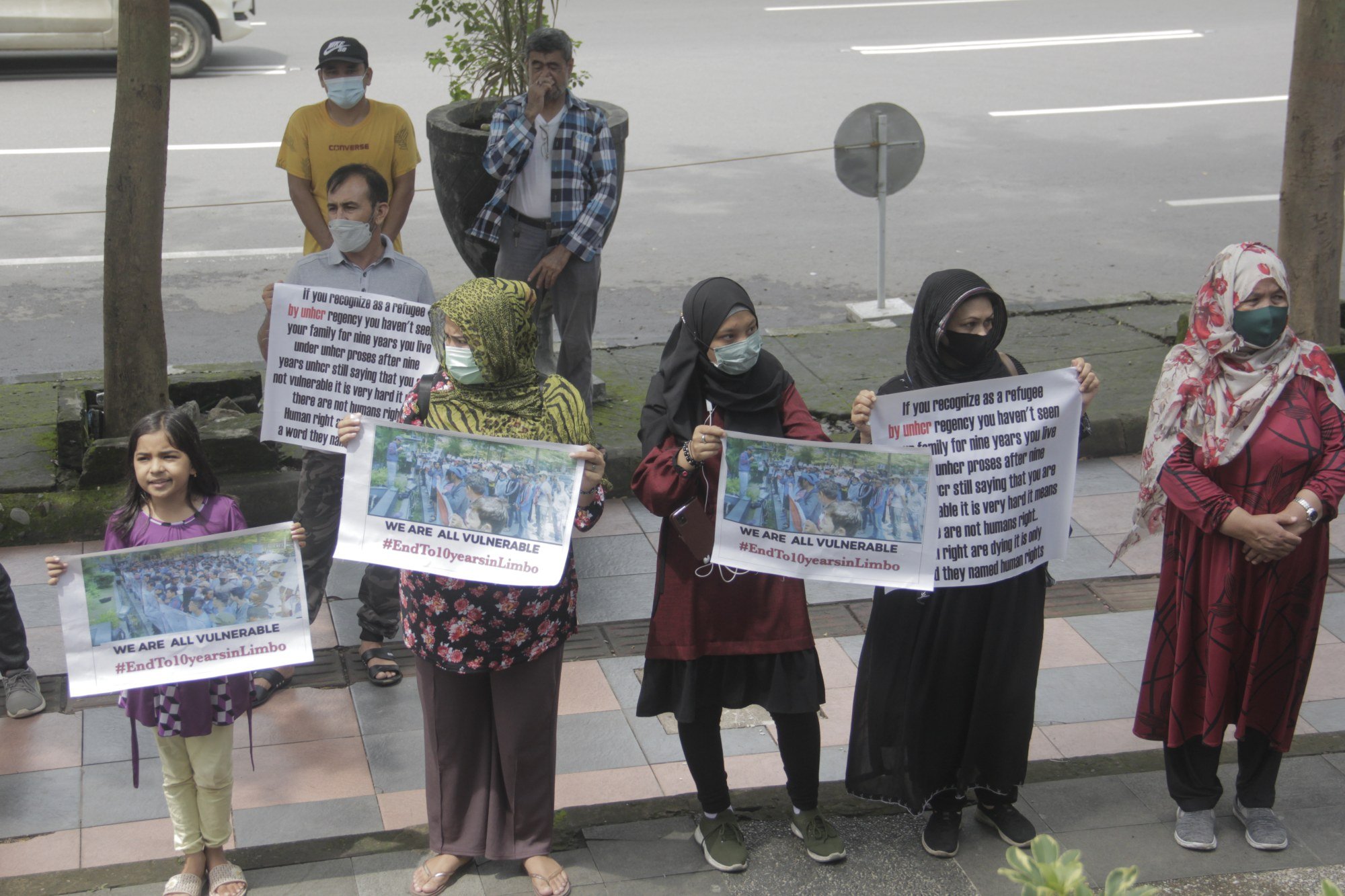 “What can I do? My family thought I’d get a decent job, but then everything became suspended in Indonesia. I want to go back to Afghanistan but I can’t. And I can’t go to a destination country,” said Reza Amiri, an Afghan immigrant in Makassar who attended a demonstration on December 9 in front of the UNHCR building in the city.

Reza, who is 39 years old, has been in Makassar for eight years and has two children who live with his wife back in Afghanistan. “I only speak to them by telephone if I have internet data,” he said.

The burden of being in limbo is increasing for immigrants as clarity about obtaining resettlement is also becoming increasingly difficult. In the last three years, 13 Afghan immigrants have died by suicide while dozens of others have made suicide attempts.

In a statement provided to This Week In Asia, UNHCR said that, “It is the unfortunate reality that the 20 resettlement countries will only accept less than 1.5 per cent of the 26 million refugees in the world. Many of these countries reduced their resettlement quota over the past few years due to various reasons, and they accept only the most vulnerable refugees. This condition has negatively affected the resettlement potential for refugees around the world, including in Indonesia.”

According to Nabi, the refugees have asked UNHCR to advocate on their behalf with countries like Canada, which pledged in September this year that it would take in 40,000 Afghan refugees fleeing the Taliban. The refugees do not believe that the agency has done so, something that UNHCR denies.

In its statement, UNHCR said that it was “deeply concerned by the situation of refugees protesting in Indonesia, including recent incidents of self-harm in Medan and in Pekanbaru,” and that the agency was working with those protesting to provide them with counselling and psychological support.

The agency said it was advocating for more resettlement places but also working with partners and the Indonesian government to find solutions for the refugees, including sponsorships for those with families abroad.

Nabi has since taken the stitches out of his lips because he said that UNHCR refused to meet with him until he did so. Despite this, he said, the refugees in Pekanbaru and across Indonesia had no plans to stop the protests, with further demonstrations and online events planned in other countries such as the US and Australia .

“UNHCR told us, 99 per cent of you will not get resettled until the end of your life. So up to you. You can stay here or go back to Afghanistan,” Nabi said.

“But how can I go back to Afghanistan? The Taliban talk so nicely on social media and to the media but they are like animals. It is really horrible in Afghanistan. If people don’t believe us, they can go and see for themselves what it’s like to live under all their rules and regulations.”